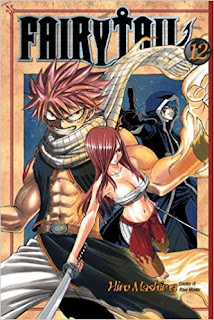 As we know from the previous chapters, Jellal was a childhood friend of Erza until when they both became mortal enemies during Volume 11. The goal Jellal wishes to achieve is to bring an evil dark wizard back to life. The thing about this cruel wizard is he truly wants to destroy Erza among every one of the guilds. Not even Lucy who has her celestial powers growing very slowly. The members of Fairy Tail always have their unique types of magic such as the Etherion. This is a very powerful type of magic created by the Council but once it is set free, everyone is guaranteed to die which is something Jellal doesn't want for himself. Shall he proceed to his heartless actions?

I may not have liked today's story but I have to admit this was very sad reading. I saw a lot of battle and death in the graphics. Although, I liked how the author decided to foreshadow something that it may not what it seems to be. It was kind of like having clickbait being used but in the manga. When I picked up this volume in the pile of the rest of my other volumes of Fairy Tail from my living room, the cover seemed to represent something really dark and somewhat mysterious. It has a navy blue background being used with some shades of maroon and black. I thought this volume is one of the most emotional ones I've read in the past few ones. I think anyone could read this particular volume since this volume doesn't have anything weird or oddly ironic. Mainly sad scenes in these chapters.