The Short Second Life of Bree Tanner by Stephenie Meyer 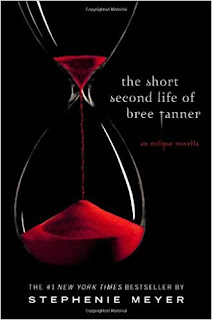 The Short Second Life of Bree Tanner, by Stephenie Meyer, is a short novel set in the Twilight Series that follows the story of a newborn vampire, Bree Tanner. She's been created (i.e. changed into a vampire) by a mysterious woman only referred to as "she," and is part of an almost orderless coven led by an inexperienced leader, Riley. Bree befriends another vampire called Diego, and they decide to leave the coven. However, Riley manipulates the vampires into believing that they have to fight another clan, the Cullens, in order to protect their territory and prey. Bree is unwillingly caught up in this fight and surrenders to the forgiving Cullens, only to meet a quick demise to the Volturi, a rival clan to the Cullens.

I enjoyed this book very much, as it was just an interesting spin-off of the original Twilight series. Unlike the books in the Twilight Saga, this book follows the story of a newborn vampire who doesn't give much thought to the murder of humans, which made for a unique perspective. In my opinion, there wasn't much not to like about this book, as it was entertaining from start to finish. I think that readers or fans of the original Twilight series would like this book very much. I would definitely recommend this novel to a friend, but only a friend who has read the original series before- then everything in this novel would make much more sense. I think that many people would enjoy this enthralling novel, even if they have never read Twilight.


Reviewed by NK, Grade 10
Montrose Library
Posted by Teen Speak at 9:51 AM No comments: