Harry Potter and the Deathly Hallows, by J.K. Rowling 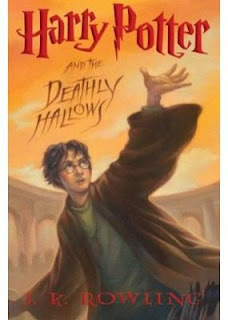 In the seventh and final book, Harry Potter and the Deathly Hallows by J.K. Rowling, of the fictional Harry Potter series, Harry leaves wizarding school along with his friends, Ron and Hermione, to track down the horcruxes. Only when all seven horcruxes are destroyed can Harry come face to face in a fight to the death with Voldemort himself. His task becomes increasingly difficult, however, as the world around him falls into his enemy' hands, and he struggles to discover secrets that his deceased headmaster, Dumbledore might have kept from him.

I am a Harry Potter fan, so I liked this book and had a hard time putting it down. It builds suspense, then wraps everything up nicely at the end, but it may be a little confusing if the reader is not familiar with the story up until this point. I would recommend it for kids, teens, adults, and enyone who wants an epic, exciting story.

Diary of a Wimpy Kid, by Jeff Kinney 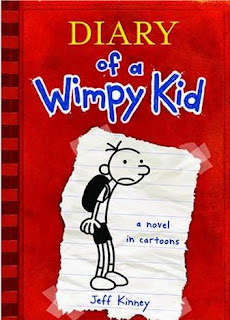 In the cartoon novel, Diary of a Wimpy Kid by Jeff Kinney, Greg Heffley is starting middle school as a scrawny and nerdy kid who has been given a diary to write on. He records his amusing takes on school, bullies, family, and his less than popular friend, Rowley. Things don't always go as planned for Greg, but as he says in the story, "I'll be famous one day, but for now, I'm stuck in middle school with a bunch of morons."

Even though it was an easy read for me, I liked this book and bought the next three in the series as well. Each page has one or more funny cartoons on it that actually depict middle school life accurately, and comically. It's one of the funniest books I've read this year and I would recommend it to kids and teens. (I don't think my mom appreciated some of the parts that made fun of parents).