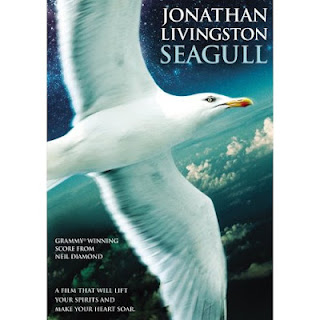 Jonathan Livingston Seagull, a book by Richard Bach is about a seagull named Jonathan Livingston Seagull, a seagull who has a passion for flying, which is very unlike the typical seagull in the flock. Everyone tells him that he should act like the rest of the flock, but he can't seem to fit in with the other seagulls so he goes back to his regular habits - flying. One day, he goes too far - he was flying in the dark. The following night, after successfully achieving two hundred fourteen miles per hour that day, he was called to the Center for Shame and cast out by the flock, therefore becoming an Outcast. Lonely and driven out by his fellow seagulls, he went beyond Far Cliffs and greatly learned more about flying; from streamlined high-speed dives to riding the high winds far towards inland. One evening, as he was flying, two gulls appeared at his wings and escorted him to heaven. There, he was welcomed by a flock that thought just like him: loved flying, and was able to spend time practicing his flight everyday hour after hour. One day in heaven, his mentor, Sullivan, compliments how quickly Jonathan learned about flight in comparison to the other gulls that came to heaven. Jonathan also gains wisdom from the elder gull, Chiang, in addition to his flight practice. Then, Chiang vanished, telling Jonathan to keep working on his flying, his passion. Shortly after his disappearance, Jonathan decided to come back to Earth. He arrives to see a young seagull, Fletcher Lynd Seagull - just cast ou t- and offers him his wisdom of flight. As Fletcher learns to fly, more young gulls cast out for their belief of flight join with Fletcher to learn how to fly from Jonathan. One day Jonathan, to the gulls' surprise, announced that it was time to return to the flock. What will happen next?

In my opinion, I really liked this book a lot. This heartwarming book openly tells us to follow our passions in life whether other people like it or not. It helped me realize that I should follow what I want to do instead of living up to my peers' expectations, like Jonathan did. Following your passions would surely make an easier future for you.

-Reviewed by Kiersten, grade 9.
Posted by Teen Speak at 9:43 AM No comments:

The Silver Chair, by C.S. Lewis 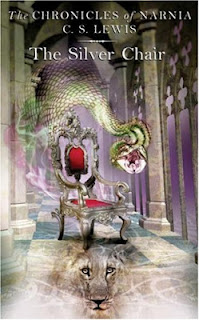 In C.S. Lewis' The Silver Chair, Eustace, the Pevensies' once-annoying cousin, comes back to Narnia with a new friend: Jill Pole. There, they are told of their mission; to rescue Kind Caspian's son, Prince Rillian, from the Underworld, accompanied by them was a Marshwiggle named Puddleglum. As they travel, they encounter giants playing cock-shies, a giant's bridge, and a fair lady and knight who told them of the castle and of Harfang-home of the gentle giants. At the castle, they were graciously welcomed by the giants and treated very properly. That night, Jill had a dream involving the Lion and the words, "UNDER ME". Jill then told the other two about her dream which got them back on track. A few days later, they found a cookery book where they found out that they were going to be eaten at the Autumn Feast and decide to run away before the hunting party comes back. Moments later, they are running for their lives to escape the pursuing giants. Puddleglum manages to find a little hole and goes in, followed by Eustace and Jill. Inside, they fill the opening with stones to prevent the dogs from catching them. As they go down deeper, however, they slipped and arrived at the Underworld. From there, Earthmen appear and escort them to the castle where Prince Rillian was living. After a meal together, however, he started to change. The next time they see him, they see him bound to a silver chair. When the Queen of the Underworld arrives, she is surprised to see the prince free, the children and the Marshwiggle present, and the silver chair destroyed. She immediately locks the door and enchants them with a sweet smelling fire and a mandolin. As they struggle to think, they attempt to tell her about Narnia, the sun, and the lion. With enchantment almost complete, Puddleglum courageously went to the fire and stamped out the fire, causing the witch to turn into a serpect, attempting to wrap itself around the prince to finish him off. Will the children escape? Will Rillian be able to see his father one more time?

In this book, I thought that this was a great book full of adventures that is being awaited. It showed how the three travelers were able to overcome a quest that seems almost impossible. With adventures at hand, the future awaits to be take on.

-Reviewed by Kiersten, grade 9.
Posted by Teen Speak at 9:39 AM No comments: 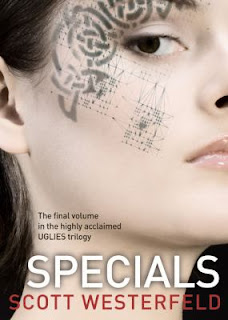 Specials by Scott Westerfield is the third book in the Uglies series. This book, like the others, picks up where Pretties, the second book, left off. But now, Tally is Special, a Cutter to be more specific. Shay has kept her promise and made Tally a cruel, killing machine. The Cutters had one goal: track down all the New Smokies and destroy the cure. But when the Smokies fight harder than usual, they realize that the city, or some city, must be helping them. Where will they end up when they follow Zane and other Pretties to the New Smoke?

Having read the first two books in the series, I already expected a spectacular book. And of course, it was. Aside from my liking of Westerfield's writing style, the plot is exciting and unexpected. Not only that, but Scott Westerfield does an amazing job of describing every event and thought that goes through Tally's head. I would recommend this book mainly to teen girls, because they might rind the idea of the book interesting. If you liked the first two books, you should definitely read this one!

-Reviewed by Kristine, grade 9.
Posted by Teen Speak at 9:38 AM No comments:

I am the wallpaper, by Mark Peter Hughes 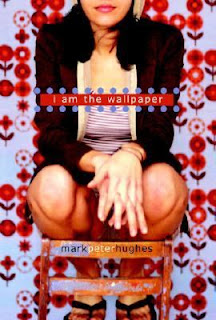 In the book I am the wallpaper by Mark Peter Hughes a gril named Floey Packer thought that now she is turning thirteen and a teenager her life is going to be different. She was tired of being the wallpaper in the background. However, it all went south when Floey opened her Aunt Sarah's gift that she received for her birthday. However, that's not the worst part. Floey's best friend, Azra, made Floey take an embarassing picture with the present her Aunt gave her. They both laugh at the picture as a joke. During the night, Azra suggested to send the picture with a thank-you card to her aunt. Floey disagreed, however Azra sent the card and the picture herself the next day to Floey's Aunt Sarah. The only bright side so far is her twenty one year old sister is getting married, however, then comes more bad news: her aunt is attending the wedding. Floey tries to avoid her aunt when she runs into Calvin, a fifteen-year-old boy. Floey was rather starting to get feeling for him or it was the champagne kicking in and she decided to make a move. They ended up slow dancing and afterward they ended tangled on the floor from an embarrasing accident Floey did. In addition, her cousins, who are staying with her for three weeks, aren't the politest. Ever since her sister's wedding day, Floey decided to change. She was to become a new person, however this doesn't go according to plan and everything she tries is going south. However, something worse than all of these embarassing things will happen to Floey.

I would give this book 4 out of 5 since the book has many things that I could connect to as a teen. I would recommend this book for girls since it has many situations where a girl could connect. It is a great book for someone who feels down and feels like nothing is going their way. This book shows that even if life can be mean and cruel, you shouldn't let it break your spirit. I really enjoyed that the main character, even after everything she has been through she still keeps trying.

The Sky is Everywhere, by Jandy Nelson

In The Sky is Everywhere by Jandy Nelson, seventeen-year-old Lennie Walker is a bookworm and band geek who has been pleased and used to living in the shadow of her older sister Bailey. But Bailey's sudden and unexpected death forces Lennie to come out of that shadow and become her indivudual self. In the midst of the grief and sadness, Lennie must also balance and deal with struggling between two boys.

I found this book to be a remarkable piece about struggles involving both grief and individuality. Overall, the story was very strong, emotional, and touching. I give this book a 10/10 rating and recommend it to all who would like to read about a deep, intense journey after the loss of a loved one.