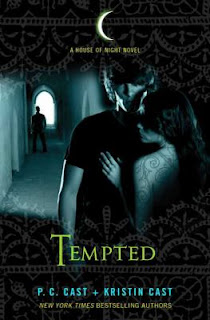 In Tempted by P.C. Cast and Kristen Cast Zoey is worried that her friendship with Stevie Rae will not last. Zoey knows that something is up with her and Stevie Rae will not tell her. While all of this is happening Zoey struggles with A-ya, the Cherokee maiden who was able to trap Kalona. Is Zoey being being pulled by the part of A-ya in her that calls to him? Meanwhile Stevie Rae is confused of how to tell Zoey or if she should even tell her about it? Will they be able to confide in each other or will they break apart? I really enjoyed this book because it has all the drama a teenage girl may sometimes love. It is full of boy craziness, friendships at steak, and personal problems. I love the different kind of fantasy brought into this book. I would recommend this book to anyone around my age. -Reviewed by Anonymous, Grade 9.
Posted by Teen Speak at 3:27 PM No comments:

The Andromeda Strain, by Michael Crichton 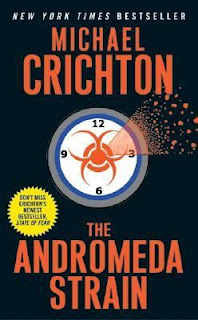 In The Andromeda Strain, by Michael Crichton, Earth is covered by uni-celled organisms that can survive, thrive, in different locations that no man could ever dream of. What about space? Can bacteria live in such extreme environment and what would happen if it landed in our home planet? Well, in a small town in Arizona called Piedmont, they found their answer: fifty-seven deaths and only two survivors, a baby and ancient old man. When a satellite carrying a new form of bacteria from space falls nearby Piedmont, almost everyone dies from a complete form of clood clotting or by insanity. The Wildfire Team is sent into motion, researching, experimenting, observing, and theorizing to try to stop this deadly organism.
I personally have never cared for the science-fiction genre (Star Wars and Star Trek seemed identical to me) but this was one story that had made me rethink my opinion. I often heard my friends talking about Michael Crichton's books and the horror if the books were to actually come true. I was intrigued and decided to read the first book I saw by Michael Crichton. It was The Andromeda Strain. I came to throughly enjoy this book and finished reading it in two days. Most of the chapter were filled with science and medical terms, and would always leave me confused and having to guess what whe characters were doing. Also, some of Crihton's cliff hangers seemed to be incorrect. For example, he would often say in an ominous tone that one of the scientists would make a foolish mistake, but in the next chapter it did not appear to be so. It added to my confusion. This book was packed of information about biology and I had learned more about bacteria here than I ever did in my fourteen years of life. At the end of the book, I wanted to learn more about biology because Crichton provides the knowledge in a way that will never leave the reader bored. I also believed that the format was interesting in that he had included files in their original forms adding to the whole secret-mission type of mood. The Andromeda Strain was a book far out of my usual style but it left me desiring more and more. I plan to read more of his books and just sit there and imagine what would happen to Earth if Michael Crichton 's stories were to all come true. I recommend this book to lovers of science-fiction and to people who are interested in science.
-Reviewed by Sophia, grade 9.
Posted by Teen Speak at 3:13 PM No comments: