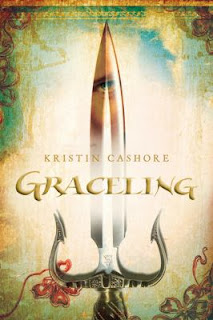 Graceling, By Kristin Cashore, takes place in the land of the Seven Kingdoms where Gracelings, or people with two different eye colors who have an unnaturally good skill, exist. Katsa is such, and she has been able to kill people with her bare hands since age eight. She has done the dirty work of her uncle, Randa, King of Middluns. On one of her missions, she meets another Graceling called Po. Katsa only pays enough attention to drug him, but when he later comes to Middluns, she notices that Po is very skilled at fighting. She becomes his friend, and that marks the point when Katsa's life truly begins.

As she has her daily fighting practices with Po, Katsa realizes that she does not have to stay under Randa's thumb. After all, nobody, save Po, could even hit her and cause harm. She frees herself from Randa's reins and sets off on an adventure with Po to find out who kidnapped Grandfather Tealiff, Po's grandfather. As Katsa continues on this journey, she learns of her true Grace . . . and also a terrible secret of a twisted king.

This exciting, impressive book is perfect for future-fiction writers. It even had me genuinely considering the option of being an author. If that isn't the case, this book will also be loved by people who wish to expand their imagination.