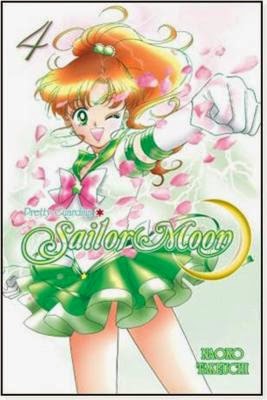 In Pretty guardian Sailor Moon, by Naoko Takeuchi, you get to know Usagi, Luna, Mano, and Ami. Usagi is sort of a flake, but she is a very good friend. Usagi is the one chosen to be Sailor Moon “the Guardian of love and justice", as she always says. She is faced with her first enemy when he friend Molly’s mother’s jewelry is infiltrated by the Nega force. She is very scared and complains about it until Luna helps her to calm down. When she finally gets her act together, she finishes off the monster by using her moon tiara. Usagi makes a friend named Ami who goes to Usagi’s school and a night school. Little did Ami or Usagi, know it was a Nega force trap. When the Nega monster over powered Sailor Moon and the Nega monster attacked Ami, Luna gave her the transformation pen so she could become Sailor Mercury.
This book is set in Tokyo where the sailor scouts lie dormant. The basic plot is Sailor Moon and Luna looking for sailor scouts and fighting Nega monsters to protect the planet. Usagi is a character some girls can relate to because some girls are lazy and flaky when it comes to school work and studying. Usagi is also a good friend who is devoted to helping them, if she devoted half of that to her studies then for sure she would be a good student. Usagi might not turn out as good as Ami but she might at least get a “C” average instead of her bad grades.

In Pretty Guardian: Sailor Moon Book 6, by Naoko Takeuchi, the fight for Mano-chan’s attention continues. Since Usagi was late again she was beat to Mano’s morning hug by Chibi-Usa and Diana. Chibi-Usa is sort of Usagi’s enemy when it comes to Mano’s attention. After school Usagi goes to the arcade as usual and she meets a boy. His uniform shows that he is attending a new academy that is supposed to be for all the big teenage stars, such as athletes, musicians, and actors. These students also are known to excel in all the subjects taught which is how the academy was named the Genius School. The group, soon after he leaves, decides to leave as well. What they find though is very unsettling; they leave only to find that a strange creature is outside.

This is a very dramatic book in the series. This is when a new enemy arises with a leader named Pharaoh 90. He uses, what are called incomplete diaman to infiltrate human bodies so their civilization can thrive on Earth. The story plot is very fun to think about. There was a question that arose in my mind ‘Is the new guy they met a boy or a girl?’ Since the person wears both boys and girls clothing. The reason for my question is we see the new guy in a Tuxedo Mask outfit and a Sailor Uranus. The answer should be in the next book.

Reviewed by Nichole Z., grade 9
Glendale Central Library
Posted by Teen Speak at 10:19 AM No comments:

In Pretty Guardian Sailor Moon Book 5, by Naoko Takeuchi, they find another sailor scout. This sailor’s name is Sailor Venus. She comes to help when Sailors Moon, Mars, Mercury, Jupiter, and Tuxedo Mask are over welled by the Nega force. She helps them to scare off the Nega force scum. She also brings a new cat friend named Atriums who Luna recognizes right away. The bad news is the Nega force finding out the true identity of Tuxedo Mask. They also find out a bit about Sailor Venus’s past as the action character, Sailor V. Coincidently, Sailor V is Usagi’s idol example for her when she is Sailor Moon.
This book is very fun and sort of dramatic. This is actually one of my least favorite in the series. The part I do like about it is they get a new scout, Sailor Venus, and a new talking feline friend, Airtimes. The finding of Artemisia brings up a great opportunity to give Luna a love interest, I thought and sure enough when Chibi-Usa comes to the past she brings a little kitty named Diana. I believe this is a very sure sign that Luna and Artemisia become very fond of each other in the future. I hope Chibi-Usa becomes a great sailor scout.

Reviewed by Nichole Z., grade 9
Glendale Central Library
Posted by Teen Speak at 10:18 AM No comments:

In Pretty Gaurdian Sailor Moon Book 7, by Naoko Takeuchi, the identity of Sailors Pluto, Uranus, Saturn and Neptune are revealed. Sailor Pluto is a Theoretical Physicist apprentice at the Genius academy, Sailors Neptune, Uranus, and Saturn are regular students at the genius academy. The three sailors Pluto, Neptune, and Uranus come with disturbing news about sailor Saturn’s potential awakening. Back in the silver millennia Sailor Saturn, guardian of ruin and silence, silently pointed her staff at the Moon and as soon as that happened the Moon fell into ruin. This is why Sailor Saturn should not be awakened on Earth; otherwise the Earth will fall into ruin.
This book is full of twist and turns and a thought of murder. But the book is not all bad since Sailor Moon finds the power of Super Sailor Moon. This is a power that may come in handy when all the Sailor scouts are together but when they are separated it is no use relining on the power. The power of Super Sailor Moon has its limits just like any other power; all the Sailor Scout’s hearts must be connected. In my opinion, since this condition was in play, the scouts should not have split up, even if the academy was big.

Reviewed by Nichole Z., grade 9
Glendale Central Library
Posted by Teen Speak at 10:15 AM No comments: 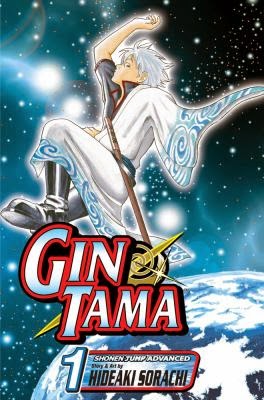 The samurai didn't stand a chance. First, the aliens invaded Japan. Next, they took all the jobs. And then they confiscated everyone's swords. So what does a hotheaded former samurai like Sakata "Gin" Gintoki do to make ends meet? Take any odd job that comes his way, even if it means losing his dignity.

Although there isn't an intriguing plot behind Gintama, by Hideaki Sorachi, what really drew me in was the hilarious situations Gintama would go through in order to make ends meet. 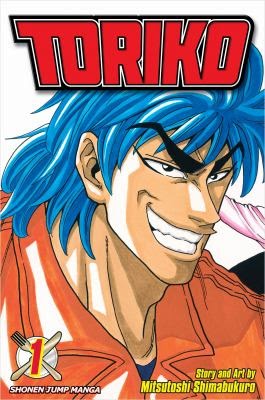 In the world of Toriko, by Mitsutoshi Shimabukuro, taste and texture of food are very important. Toriko is a hunter of precious foods regularly hired by restaurants and the rich. He is a man with inhuman skills to capture the ferocious, evasive and rare animals to complete his ultimate dinner course. His current accomplice, a weak, timid person, but who was inspired by Toriko's greatness, accompanies him on all his journeys on his quest for the course of his life.

Not only is Toriko funny, it's plot is simple enough that you could start off at any point in the story. Although the comedy might be lost because of the lost background on some characters, the central idea of Toriko as a cook hunting precious food ingredients is not lost.