Lord of the Flies, by William Golding 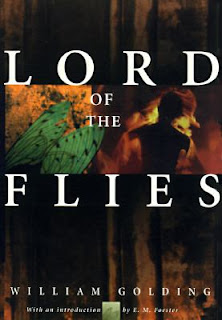 Lord of the Flies, by William Golding, takes place during World War II when a plane crashes on an island, stranding many British schoolboys. They rejoice that no adult is there to order them around and they do whatever they want. They elect Ralph, who blew on a conch shell to gather them, as chief and a few older children (or "bigguns" as Ralph calls them) are chosen as hunters. With help from each other and a bit more from the glasses of Piggy, the "smart" one of the boys, they manage to create a system of order. But alas, this fragile balance is broken by the talk of a beast on the island.

With no adults to seem strong and say that no such beast exists, everything collapses on itself. Jack, the leader of the hunters, creates his own tribe against Ralph. Many bigguns and "littluns" join Jack. Ralph is only left with Piggy, Sam, Eric, and a few littluns. The hope of being rescued is very far off as the "beast" starts a reign of terror. With perfect British Schoolboys turning into savages of a tribe, staying sane is difficult, let alone rescue. What will happen to the boys?

Lord of the Flies is one of those books where there is some, if not a lot, of violence. It is not recommended to anyone who can not stand much violence. I only think that people who are interested in reading about survival should try this book. Remember: this book might be too violent for you. 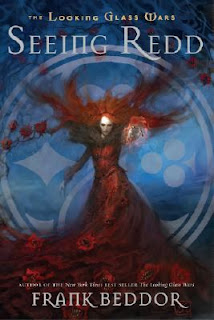 As the 2nd book in the Looking Glass Wars series, Seeing Redd, by Frank Beddor, is another story where Queen Alyss Heart struggles against her resurrected aunt, Redd. After thwarting Redd and her regime, Alyss finally understood the meaning of being a queen. As Alyss tries to finish up to transition from tyranny to peaceful harmony in her queendom, she is also in love with Dodge, a guardsman who had been her childhood playmate, further complicating her busy life. However, as Wonderland is slowly rebuilding, Redd strikes again, after terrorizing Earth. White Imagination and Alyss's life are again threatened as the war emerges again.

This book is actually a little more complicated than the first book. Conspiracy is also now added to the plot, as the Parliament is starting to plot against Alyss and her government. A great read overall, Seeing Redd may even surpass the first book in excitement. This is a great book for teens and young adults, much like The Looking Glass Wars.


-Reviewed by Jonathan, grade 9.
Posted by Teen Speak at 9:00 AM No comments: 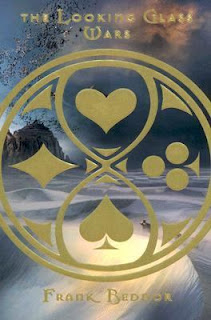 The Looking Glass Wars, by Frank Beddor, takes place in a place called Wonderland. Wonderland has just entered peace for 12 years after a brutal civial war between two sisters - evil Redd and good Genevieve. Redd lost and has been exiled to a faraway fortress. The story starts with the entire "queendom" celebrating Princess Alyss Heart's birthday. However, King Nolan, Genevieve's husband and Alyss's father, is soon murdered while returning from negotiations with another country. The murderer was no one else but Redd and her soldiers. However, the death of King Nolan fails to reach Wonderland its monarchs, who were celebrating. As the partying continues, the palace and Wonderland are ambushed from the inside by Redd's troops. Caught by surprise the queendom's Millinery attempts to defend from the onslaught to no avail. The queen's top bodyguard, Hatter Madigan, is sent to protect the princess by escaping Redd. Genevieve is then executed personally by Redd. Upon finding Alyss, Hatter escapes through a portal called Pool of Tears. Alyss is then separated with Hatter and forced into a new and alien world. Can Alyss ever survive in this new world and regain her rightful throne as Queen of Wonderland?

I loved this story as it transformed the childish story of Alice in Wonderland into an exciting and more mature story. This story shows Alyss's adventures in the new world, which apparently is our world during the mid-1800's. I recommend this story to teens and young adults.

The Sea of Monsters, by Rick Riordan 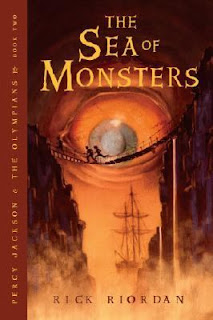 The Sea of Monsters, by Rick Riordan, is the second book of the exciting Percy Jackson series. Percy Jackson, the son of Poseidon, returns once again to battle against the Titans and mythological monsters. Percy Jackson's seventh grade had been unusually uneventful, a first in all of Percy's years in school life. He also made a new, though unpopular, friend whose name is Tyson. However, as soon as the peaceful seventh grade seems to come to an end, monsters once again started to attack Percy. After Annabeth saves him, he is once again brought to Camp Half Blood, a camp specifically made for training and protecting demigods - or children of gods and mortals. However, the camp which was originally thought to be safe was under attack. After finding out that the magical borders of the camp had been weakened, Percy Jackson once again prepares to save Camp Half Blood and his friends from being overrun by monsters.

This book was a very entertaining read as it is a great story. As the book is part of an exciting series, I admit having trouble letting the book go in order to do other things. This book is a relatively good book though I enjoyed this less than the other books in this series. Although this book may be less exciting than the other books, it is a must-read if you want to understand and enjoy the rest of the series. I recommend this book to kids and teens alike.