What Happened to Goodbye, by Dessen Sarah 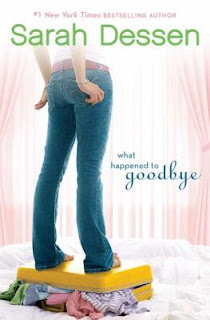 Sarah Dessen's "What Happened to Goodbye" is a story about a teenage girl named McLean who has spent the last two years moving around different towns with her father after her parnets' divorce. At each town, sher creates a different name as well as a different persona because she knows she won't be staying long. Her father's business ventures keep him taveling and as her mother has started a new family and basically forgotten all about her, all she could do is go along with him, create a new person, and present it to her temporary peers. However, she's sick of pretending to be everything she's not at this last town they come to and when she meets Dave- the boy next door who offers to show her around the town while managing parental problems of his own- she decides it's finally time to be herself. Even if she doesn't quite know who that is anymore.

This book is an amazing coming of age novel and I highly recommend it to all teens as they'll find it's easy to relate to McLean and her struggle to find herself. 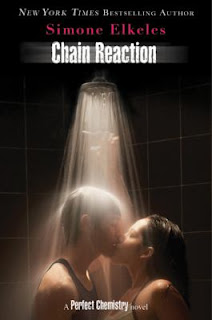 In the third and final installment of the trilogy "Perfect Chemistry," Simone Elkeles switches things around. In Chain Reaction  the youngest Fuentes brother- Luis has definitely got the same adventure seeking gene Carlos and Alex had before him. But there's a catch - Luis is determined to obtain his goal in becoming an astronaut. However, things start whirling out of control for the "well - behaved" Fuentes brother when he meets Nikki Cruz. She's a strong Latina with attitude who has promised herself to never trust boys again, as well as never date a boy from the south side of Fairfield. As soon as these two meet at Alex and Brittany 's wedding, it's a whirlwind of passion and excitement as the same gang that almost took his brothers' lives is determined to make their way into Luis's.

Simone Elkeles has done it again and I highly recommend reading this book, especially if you loved the first two and are just aching to find out what happens next with the irresistible and entertaining Fuentes brothers.

Rules of Attraction, by Simone Ekleles 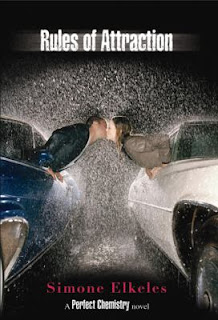 Rules of Attraction, by Simone Elkeles, picks up right where Perfect Chemistry left off, but this time it's with different Fuentes brother! If you thought Alex Fuentes was a bad boy , you have yet to meet Carlos.  It's been a year since Alex was jumped out of the gang and he's attending college and still going strong with Brittany. However, his younger brother isn't pleased. After having to leave his girlfriend Destiny and live in Mexico with his mother and younger brother for the past year, Carlos has gone off the rails and his behavior has gotten so bad that his mother is forced to send him to be set straight by Alex- in Colorado of all places. Here, he meets Kiara- a tomboy who loves hiking and working on cars on her spare time. She surprises him and he automatically doesn't like her because he assumes she thinks she's too good for him. However, Kiara teaches Carlos a thing or two about himself as he struggles to deal with the temptations of the gang his brother had face before him. There's no escape from what you're born into, right?

Simone Elkeles has done it again with the second installment of the Perfect Chemistry series. If you loved the first one, you'll adore the second as it has the same amount of drama, romance, and action - if not more-than Perfect Chemistry did itself. I highly recommend reading this book after you've read Perfect Chemistry as it is the sequel. You'll be at the edge of your seat , turning pages, trying to figure out what happens next in the lives of the Fuentes brothers. 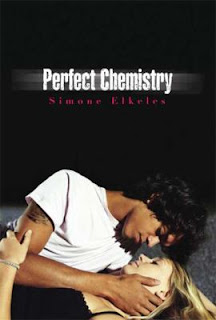 In Perfect Chemistry , by Simone Elkeles writes the story of two teenagers - Alejandro (Alex) Fuentes and Brittany Ellis who live on opposite ends of the same town and attend the same high school. The book is written in alternating points of view so one chapter will be told by Brittany as the other is told by Alex. Brittany is a typical all- American , popluar cheerleader with a football player boyfriend and perfect life at first glance whereas Alex struggles to balance a job at his uncle's body shop, maintain decent grades so he'll be the first of his family to graduate high school, and look after his motherand two younger brothers. However, there's a catch- Alex is also a gang member and him and Brittany have just been assigned as Chemistry partners for the year and they can't stand each other. They are absolute polar opposites and can barely stand being in the same room together, so having to put together a project that determines their grade in the class without killing each other first is a difficult task.

As the story progresses, we see that Brittany is anything but  the spoiled, selfish rich girl Alex thinks she is and that there's way more to Alex than his sterotypical "Mexicano " roots and ties to the gang as he begins to dig into the truth behind his father's murder. Simone Elkeles does a great job in making sure both Alex's and Brittany's voices are heard and lets the reader decide for themself what they think of each teen as an individual. It's the type of book you can barely put down to go use the bathroom for and I highly recommended it to both teenage girls and boys seeing as how there's everything from romance to gang violence and every second is action packed.