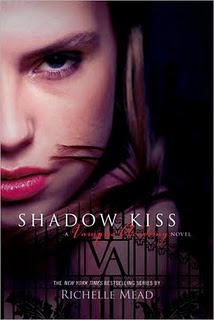 Will she have to choose between them? Who will she chose? What will be the outcome? Shadow Kissed, by Richelle Mead, is about Rosemary Hathaway, a vampire in training, and her best friend Vasilissa Dragomir impatiently waiting for graduation. They can't wait for their lives outside the academy's iron gates to begin. While Rose is also mentally preparating herself after Mason, she is paired with her last person in her mind Christian Ozera. From focusing on her trials to completing her field training the last thing on Roses mind is the thought of having to lose Dimitri. And her dreams may come true when a band of Strigoi attack the school leaving many dead and others...
The third installment in the Vampire Academy six pieces chronicles makes us ask all the questions. What will happen with Rose and Dimitri? Will Adrian and Lissa find what Rose is up to? I personally think that this one is the beat book in the whole series. This story is one that will get to you. The other two books act just as starting clocks they introduced the characters and gave you a theory behind their existence. This story is for anyone who wants to read about vampire romances.
-reviewed by T.A., grade 10.
Posted by Teen Speak at 3:16 PM No comments:

The Merchant of Venice, by William Shakespeare 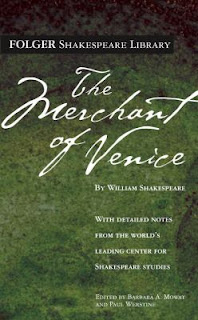 The Merchant of Venice, by William Shakespeare, is a story about a man whose life is saved by two wise women. Antonio is a good and generous Venetian who promises to pay Shylock the money borrowed by Bassanio or else allow Shylock to cut off a pound of his flesh. Unfortunately, Bassanio is unable to pay his debt. Antonio goes on trial and Shylock demands Antonio's flesh. Luckily, Portia and Nerissa dress up as lawyer and a clerk. Portia orders Shylock to cut off exactly one pound without a single drop of blood from Antonio. Shylock realizes that he is unable to get what he wants. Portia and Nerissa end up saving Antonio's life.
In addition to the main story, there are other little events. One of them is when Bassanio tries to marry Portia. To marry Portia, one has to pass a test. This test is designed by Portia's father in order to pick up the right husband for Portia. Bassanio must make a choice between three caskets: a gold one, a silver one, and a lead one. Who chooses the gold casket "shell get what many men desire." Who chooses the silver casket "Shall get as much as he deserves." Who chooses the lead casket "must give and hazard all he hath." Bassanio chooses the lead casket which is the right one and marries Portia.
I recommend this book to teens who want a challenge. This book is written in sixteenth century English, so it might be a bid hard.
Reviewed by SC.
Posted by Teen Speak at 6:56 PM No comments:

The Beast, by Walter Dean Meyers 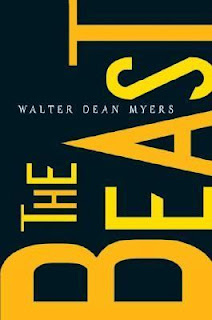 The Beast, by Dean Meyers, was a life changing story. This book was about a young man lost and confused looking for romance. This sad story takes place in the streets of Harlem, New York also known as the ghetto. He found the girl of his dreams Gabriela. They fell in love with each other but Anthony had to go off to college. Little did he know that when he returned he found the sweet Gabi turned into a hideous drug addict. Gabi had fallen to "the beast." He was lost and asked her to explain why she was doing drugs. She had too many problems and was suffering from depression; she had lost her mother too. Anthony helped her out of the drug hole; he gave her love and attention. He took her to rehabilitation programs and advised her. His famous line was "doing drugs won't lead you out of your problems, but I will." This is a romantic yet real life situation. Millions of people are suggering from drug addiction but sadly they don't have any support. I think I can't relate to this story because I've never been in a situation like this. Drugs are a dream eating habit, and I will never fall into "the beast"