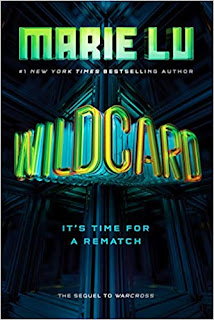 Wildcard is the sequel to Warcross in Marie Lu's Warcross series. The entire world had been affected by the program Hideo Tanaka, the creator of the Neurolink (a virtual/augmented reality system) had released to almost all the users of the Neurolink. This program essentially compelled people who have broken the law to either turn themselves in or commit suicide. It also gave Tanaka total control over them.
A hacker group, only known as the Blackcoats, contact Emika Chen, the main character, and recruit her into helping them shut down this program. Emika has to try and somehow gain control and shut this program down, using her previous friendship with Hideo to get close to him. However, she realizes that the Blackcoats are not what they seem, and is quickly swallowed in a web of hacking and subterfuge.

I enjoyed this book, but as I read the first book a while ago, I couldn't fully appreciate its story. I liked emotions and the sudden twists that the author excellently wrote into the novel's plot. However, I didn't like how predictable the story got in the end. I think that people who have read Marie Lu books and enjoyed them would like this book. I also think that people who are interested in hacking and artificial intelligence would also enjoy this book. This book made me curious about its proposed idea of downloading someone's mind and detaching it from a physical body. I enjoyed this book despite not remembering parts of the first book and I highly recommend it to others.


Reviewed by NK, Grade 10
Montrose Library
Posted by Teen Speak at 9:55 AM No comments:

Garfield Sits Around the House by Jim Davis 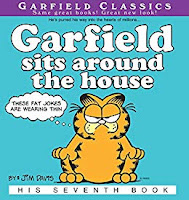 The seventh book of this comic series is all about Garfield having a hard time trying to find other hobbies he could do at home instead of the same old usual things such as eating and sleeping constantly. Although, one hobby he finds is picking on Odie in a very weird and somehow insulting way by letting him fall off of a tree. Garfield also tries falling off buildings as he would with a tree and sometimes he would do it on the top of his house roof. Now, which one of these hobbies would Garfield do the most during his daily life?

I don't have a strong opinion on this book because there are times I like it but at the same time, I don't. For example, the graphics always look the same that sometimes the same images are being used constantly from the other books in the series. It's pretty hard to write a review on this in my personal opinion since I can't say much about how I felt about it. Although I liked the fact of how they didn't make the book so long to read and it is a child-friendly book even though when I checked out the book itself, it was in the teen category. I think everyone of all ages can read this book because I know anyone would enjoy the Garfield series.


Reviewed by Hannah Rachel., Grade 10
Downtown Central Library
Posted by Teen Speak at 9:44 AM No comments:

Garfield eats his heart out: His Sixth Book by Jim Davis

Everyone knows that Garfield is a cat who tends to eat a lot in an unhealthy way. Jon decides to take Garfield to the veterinarian so he can know what's wrong with his cat and he would go there every week during his checkups for him to try getting Liz to go out with him on a date. Sadly, Garfield is diagnosed with a sugar withdrawal so he is going to need to reduce his sugar and starch consumption by going on a healthy diet and changing his lifestyle. Jon struggles while doing this but at times he would make it work.

This had a great story, to begin with. Some of the graphics looked humorous but there were some I didn't like as much as certain ones because I thought they looked a bit basic. For example, there was one part where Garfield would hide under his bed all the time and the graphics always looked the same except it had word bubbles in them. Even though these comics were written in the 70s, I wish there was some color on the images like the ones at the back of the book cover. From the beginning to the middle of the book, I felt like I enjoyed reading this but when I began to get closer to the end of the strip, I started to feel a little bored. And I think everyone of all ages can read these comics.

Posted by Teen Speak at 4:42 PM No comments: