The Hunger Games, by Suzanne Collins, is a book where the word utopia is defined like never before. Sixteen year old Katniss Everdeen lives in the world after its end. The twelve Districts are controlled by the Capitol, their government. When Katniss volunteers herself in the games instead of her sister, she has no idea what to expect. With the help of her partner, Peeta, Katniss will first-hand experience the hard truth. The Games are specifically designed to show the residences in the multiple Districts how the Capitol controls them. The golden country they live in has deep dark secrets that they don't want anyone to know...but Katniss can only do so much while mentally and physically preparing herself for the games. The girl from District twelve will prove to everyone {even herself} that she can do much more than expected. But what happens when a simple berries act can be called rebellious?


This story is an unforgettable journey to the end of the world. If you think that living in a perfect utopia is perfect, think again. Katniss proves that even in perfeciton, poverty and dictatorship are possible. To all those who enjoyed the book Pretties, by Scott Westerfield, this book is for you. Young readers everywhere are seeing that utopia is not always good. Or is it? 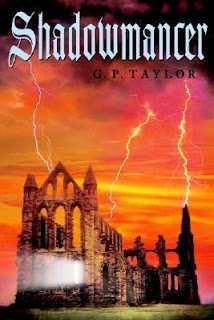 Shadowmancer, by G.P. Taylor, is about someone named Vicar Obadiah Demurral that doesn't just want to rule a village; he has his mind on taking over the entire world. Demurral needs to obtain a weapon in order to successfully take over the world that no one including God himselt could stop. Even without this weapon Demurral is still a shadowmancer-a sorcerer who speaks to the dead that will take down anyone that interferes with his plan. Despite this, Raphah wants to reclaim the weapon that once belonged to his people until Demurral soon snatched it away. However, Raphah cannot fight, decide to help raphah. This decision is bold for such young people because now the fate of the world lies in their hands.

This book not only captures the vivid details of the struggles between good and evil; it also shows the power of sorcery or black magic and the power of determination and inner strength. If you enjoy all this magic as well as an adventure story, then I recommend this book to you.
-Reviewed by anonymous, grade 10.
Posted by Teen Speak at 2:57 PM No comments: