The Crown's Game by Evelyn Skye 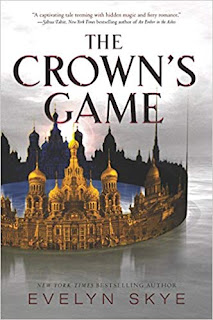 Vika Andreyeva and Nikolai Karimov are two young enchanters living in Russia. Vika has lived on remote, sheltered Ovchinin Island her whole life, raised by her loving father and mentor, Sergei. Nikolai is an orphan from the steppe who was found at a young age by his mentor, Sergei's brother Galina, and brought to St. Petersburg to train with her. The two enchanters have led completely separate lives until an unexpected event is initiated- the Crown's Game. In this ancient duel, Vika and Nikolai must perform feats of magic, each trying to outdo the other, or even better, kill each other, to impress the tsar. The winner will become the Imperial Enchanter, the tsar's most powerful advisor. The loser will die. But as Vika and Nikolai compete, creating magical fountains, dream benches, and even a new island, they realize that they can't kill each other- they have fallen in love. To make things even more complicated, Pasha, the tsar's son, falls for Vika. He vows to help defeat the other enchanter, unknowingly pitting himself against Nikolai, his best friend. Over the course of the Crown's Game, secrets about Vika and Nikolai's parents are revealed, friendships are created and lost, and deadly sacrifices are made. But in the end, who will win?

I really enjoyed the excitement, suspense, drama, and romance in The Crown's Game. I think there was a little too much of the romance, though. I also wish there was more humor- while there were some funny moments, I think a bit more could have lightened the book from all the drama about love, death, betrayal, etc. However, it was still very fun to read, and I kept wanting to know what happened next. (I am planning on reading the sequel, The Crown's Fate, too.) Fans of Legend, by Marie Lu, will especially like this book because they both feature unexpected lovers who are from different places and have different backgrounds, yet are somehow brought together. Also, the main characters in both books are orphans and are being forced to use their talents and resourcefulness to fend for themselves. Finally, The Crown's Game has a pretty low reading level (5th-6th grade), so any teen can enjoy this excellent book.

Posted by Teen Speak at 3:16 PM No comments:

Who Are You, Really? by Brian Little 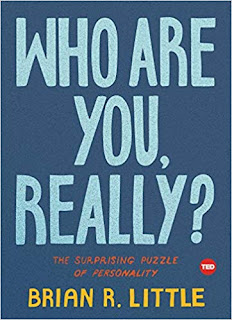 This psychology book will leave you psychoanalyzing everyone you meet. Brain R. Little provides an incredible look into the development of personality. Though explainitions and metaphors, the reader comes to understand what makes everyone themselves and how this happens. Once you know who you are and more importantly why you're this way, choices and decisions come easier. Even if you don't read this looking for insight, understanding people really comes in handy.

This is by far my favorite psychology book that I have read. The information it contains is extremely important when you're trying to understand what made you the way you are. It provides a great platform for self exploration and personal revelations. Its not just very helpful, but also interesting if you're only looking for a light read. It beautifully written and will really leave you thinking.