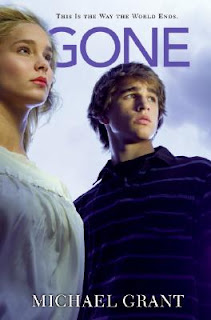 Gone, by Michael Grant, is a great book [and is the first in a series]. I personally loved it. Well the book is about a teenager named Sam who has a superpower and he does not know that he does. The sad thing is that he also has a brother that he does not know. Well when Sam found out that he had a brother he was mad that his mother kept this secret from him. When he went home to tell his mom that he found out he had a brother, she was not there. He looked everywhere for her but she was nowhere to be found. So Sam waited and waited and waited, but she never came home. In fact, none of the parents came home. Sam was now scared so he went to his friend's house, but on the way there he saw a fire. He started to help and when he did he found out that a little girl was trapped and went in. When he went in, the little girl was scared. AND SHE SHOT FIRE OUT OF HER HANDS. He almost got killed, and after that the girl passed out. Sam went to get her and when she .... well I guess you have to read the rest to find out. I think this book is good for the age of 13-19. The thing I like about this book is its action and adventures. The thing I didn't like about the book is when the action turns into beating and violence. It made me feel like I was in the book when I was reading. It was fun, exciting, and sometimes sad. But overall it was a great book for people who like adventure or action. If not, you still might like it because it has some romance. The best book I have read so far. - Reviewed by Tanya. .
Posted by Cheryl, Teen Services Librarian at 9:17 AM 1 comment: 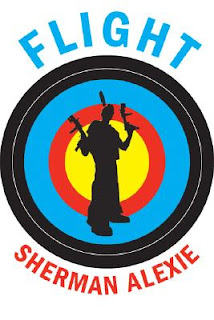 Flight, by Sherman Alexie, is about a Native American Indian teen who starts out planning a bank robbery but as he's about to he goes back in time and learns about what it was like to be an Indian in different time frames. He learns how it was like to live during the Civil War and about his father who never recognized him as his son. The protagonist begins by not giving a care about his life to a mature teenager who accepts his destiny which are in the hands of himself and a thoughtful police officer who saves him from the other foster homes. This book is both funny and is filled with action. This book is simple to read and the language is comprehensible which makes the pages of the story easier to finish. I recommend this book to anyone who loves reading for the fun of it. :) - Reviewed by Nassima, grade 11. .
Posted by Cheryl, Teen Services Librarian at 2:15 PM No comments: