The Sable Queen, by Redwall Abbey 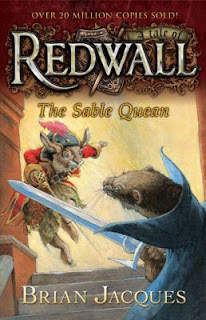 The Sable Quean is a book about Redwall Abbey. It is one book among a lot of others by Brian Jacques. Zwilt the shade is a weasel who is an expert at moving swiftly and stealthily. He takes orders from Vilaya the Sable Queen, but he has a command of 200 Ravangers, a group of vermin. Buckler is a young hare who has already mastered swordsmanship. Lord Brang is the Badger lord of Salamandastron, the legendary mountain where fighting hares and badgers alike live. He sends Buckler and his fat friend, Diggs, on a journey to Redwall Abbey to deliver new bell tower ropes that Brang had made. After Buck had made this trip, then he would be allowed to visit his brother who lived near Redwall. On the way to Redwall, they rescue a young shrew made from a couple Ravangers. Her name was Flib, and the fox and stoat were trying to kidnap her on Zwilt's orders. Flib was a shrew and had a younger sister and brother, Midda and Borti. Both who had been kidnapped by Ravangers, however, there were a lot more than just the two of them. Buck, Diggs and Flib continued on the journey to Redwall. They met up with Log a Log Jango and Oakheart, who were shrews as well. However, Oakheart and Log a Log Jango's children were missing and they planned to head to Redwall for assistance in finding their young. Meanwhile, at Redwall, a group of Ravangers waited outside the gates for any kids to come out so they could kidnap them. The group had split into groups to watch the four gates of Redwall. A rat named Globby snuck over the ramparts against orders and stuffed himself in the kitchen until he passed out. In the morning he was discovered by Redwallers, and they kept him to find out how many others like him were around. They cut down the tree that Globby had climbed to get over the walls, and later found that two other Redwall children had been kidnapped. They went to interrogate Globby, but Globby had escaped and was hiding in the dormitories. A squirrel named Tollum went to the attic and swung down into the dormitories and his Globby in the neck. However, Globby had a knife and stabbed Tollum before he died. In the meantime, the captured young ones had been digging a tunnel in the dungeon where they were being kept. Axtel, a warrior mole, was looking for a place to dig. He started digging and suddenly the ground collapsed. He found Flib and a couple of mole babies in the tunnel and got them out, but the tunnel collapsed before he could reach the others. Later, he dug through the rubble and reached the rest of the young ones. He got a few of them out, but then had to retreat because he got wounded in his paw. Buck, Diggs, and the shrew crew had reached Redwall, and Buck found out from Clarinna, his brother's wife, that his brother and nephews had been killed by Zwilt the Shade and a bunch of Ravangers. Buck swore revenge and then organized a search party for the missing children. They found Axtel and the few he had manages to rescue and took them safely back to Redwall. Then they organized another rescue party to get the remaining children from Brockhall (the place they were being held). For the meantime, the rest of the young were relocated to a cave where they couldn't dig. However, one of the kids found a secret tunnel in the cave, and they took a couple lanterns and went down the tunnel while the guards were asleep. They encountered an underground lake and a blind pike. They slowly made their way through the lake and ran down another tunnel because they could hear Ravanges following them. They met crazy hedgehog named Triggut, who helped them escape the Ravangers, but they took them hostage himself! Zwilt, Vilaya, Dirva (Vilaya's assistant), and the Ravanger mob chased after the young, but found that they couldn't hunt them down. Then, Vilaya challenged Zwilt's command. Zwilt killed Dirva first and then faced Vilaya with her poison dagger. Zwilt stabbed Vilaya before she could poison him, and she passed out. Before Zwilt could behead her, a supporter of Vilaya stepped between the body and Zwilt and said she could bury Vilaya. Zwilt then marched toward Redwall planning to take the Abbey by force. Meanwhile, Buck and the rescue party raided Brockhall, but found it deserted. They went outside and found that the Ravangers were heading to Redwall. They went headed toward Redwall with all haste, but accidentally left behind Diggs. Diggs had met up with another badger, Ambrevina they went downstream on a makeshift raft and suddenly found the rest of the young ones and Triggut. They rescued the young ones and left them with a trustworthy water mole, while they headed to Redwall. Zwilt had snuck into Redwall though the back and encountered Diggs (who just got there). Zwilt cut his ear off, but then had to face Buck, who had sworn an oath of vengeance. Who will defeat the other? And will Redwallers be able to defend their home from two hundred Ravangers? Find out. I think this book was very good. It wasn't predictable and had a few twists. This book is for people who like fantasy or adventurous books, or even for people who like animals. 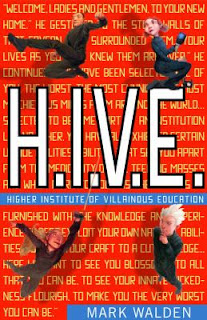 H.I.V.E., a young adult book by Mark Walden, is about Otto Malpense and friends, who get enrolled into H.I.V.E., or The Higher Institute for Villainous Education, by force and by parent enrollment from all around the world. They are all young "Alpha" prodigies who are being educated in the ways of evil. This is a very interesting story because this follows the "bad guys" as the protagonists. All of the students have some something criminally advanced as children and they get sent to H.I.V.E.. Otto and his new friends arrive and, they feel as if the school is not just a place to learn, but they perceive it more like it is a prison. They learn, have fun, face bullies and suspicious teachers, but all the while the friends plan their departure with great care and secrecy. While the master plan is being built up, the students Otto, Wing, Laura, Shelby, and Nigel bond and find out about each other's past. The headmaster has a secret, his boss has a secret, Wing has a secret, everyone has some secret in the school and every other person is prying to get the secrets out of the unknown.

I would surely recommend this book to anybody trying to escape the stereotype and also wants to experience some action, mystery, science fiction, and a bit of comedy. I really enjoyed this story but the writing style was average and the reading level is not too high so if you are looking for a challenge book, look elsewhere. Other than a few quirks here and there, this book was truly fun and it pulled me in until I finished the whole thing. H.I.V.E. is a page-turner you won't want to stop reading.