The Battle of Skandia, by John Flanagan 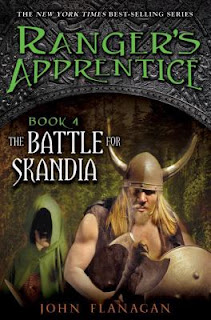 The Ranger's Apprentice, by John Flanagan, introduces a Fourth book in its series. Book four: The Battle of Skandia. Halt and Horace make it to Skandia, but find out an attack planned on the Skandians by a huge force of men. Halt and Horace warn the Skandians, and Halt creates a plan to win the war coming on. Will trains the slaves to become archers so they can help in the war. The attacking warriors charged the Skandians, but many died by a rain of arrows sent from Will's forces. Will the Skandians be able to overcome these outside attackers?

Book four was full with adventure and that's what I look for in a book. The war was really detailed, and with every line, something new happened. Will is now a real ranger, and has matured. His adventures will get even more exciting. With each book, I learn many things that I can relate to life. From this book, I learned that no matter the odds, as long as you have a good plan, you will succeed. This book, as well as the series, Ranger's Apprentice, will always be one of my favorites, and I recommend this book to anyone. 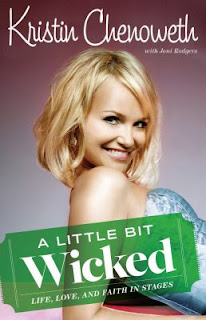 A Little Bit Wicked is an autobiography written by Broadway actress Kristin Chenoweth herself. Starting from birth, this book details every event on her way to stardom, from her adoption, being raised in a small Oklahoma town, and always placing second runner-up in beauty pageants, to sharing apartments in New York and finally originating the rola of Glinda in the broadway musical, "Wicked."
I enjoyed this book, and I think that any musical theater/Wicked/Kristin Chenoweth fan should read it. It was really interesting for me to hear what happened before she was Glinda the Good Witch, and it includes both the highs and the lows. This book is well written, and several times I actually laughed out loud while reading it. It is very entertaining and I would recommend it for teens and older.
-Reviewed by Anonymous, grade 9.
Posted by Teen Speak at 3:40 PM No comments: