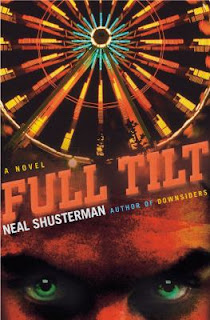 Full Tilt, by Neal Shusterman, is about a sixteen-year-old named Blake and his brother, Quinn, who are exact opposites. Blake is very responsible and calm; Quinn is fearless and thrill-seeking. Blake always has to keep an eye out for Quinn, but this time it went too far. Quinn decided he wanted to go into a bizarre phantom carnival that traps customers forever. The only way out is for Blake to survive seven deadly rides by dawn, each which represents a personal fear. These rides range from a merry-go-round that goes haywire when its animals turn real to a bumper car ride transforming into a demolition derby. Untimately Blake has to face up to a horrible secret in his past to save him and his brother if their soul aren't taken first.

I really enjoyed Full Tilt, by Neal Shusterman. The storyline was exciting and thrilling, it really made me feel as if I were a part of the action. This book is one of those books that you just can't put down. Perfect as a quick read that will get you to enjoy reading again. I recommend this book to mostly boys, but this book is for anyone who enjoys exciting, thrilling stories. This book put me on the edge of my seat and wanting to read more from this author. I hope it will do the same to you. 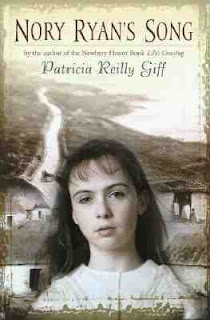 Nory Ryan's Song, by Patricia Reilly Giff, is a historical fiction book set in the year 1845 that takes place on Maidin Bay, a land located on the west coast of Ireland. The protagonist of the book is a girl named Nory Ryan. Her family raises potatoes as their primary source of food. Her father, Da, sails away on a fishing boat to earn money for Lord Cunningham, the landlord of Maidin Bay. Lord Cunningham tries to make life as difficult as possible for the Irish people so they will immigrate to another place and he will be able to graze sheep over the lands of abandoned homes. Nory Ryan's sister, Maggie Ryan, decides to move to Brooklyn, a city in New York, which is in the United States. The Ryan family hope to move to the United States as well.

In a few weeks, almost every citizen, serf and farmer leave Maidin Bay to go to America forever to avoid bankruptcy. The Ryans start to lose money and Da does not return during the time he usually does every year. A potato blight occurs, which runs the potatoes and start a famine. Will Nory Ryan's family survive?

I highly recommend this book because it has a big appeal that makes people learn of experiencing famines and harsh times when having to work for a landlord.