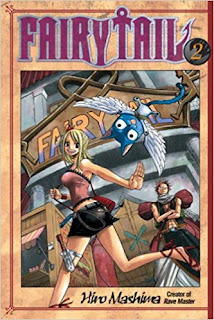 Ever since Lucy joined forces with the fairy tail guild, she needed to learn some fighting skills and techniques from her fellow Natsu. Natsu, Lucy, and Happy are all given a mission to destroy a book in particular called Daybreak since it is somehow considered evil and forbidden for the son of the author because it tends to give him very unpleasant flashbacks and memories from his father's death. All three of them work their way to destroy the book but there are things that have not been planned as it should've.

Reading the manga version of Fairy Tail is actually better than the anime itself. The manga made more sense unlike the anime because the author included clear details in the plot in which a reader will be able to understand. The animation and graphics are black and white which is considered beneficial since if it were to be colored, the images might have hurt the reader's eyes depending if they are sensitive to flashing pictures. Some scenes in the book were a little inappropriate because of the sexual humor that has been made which is why I would recommend this series to people who are thirteen years of age or older. But if not, maybe fifteen years of age would work since that is when I began to read these volumes. There is also a lot of violence, including blood scenes, but only because the main focus on this particular Japanese manga is friendship and how people should stay united in every way possible. If you are the type of person that is into reading manga or looking for manga suggestions, then I would recommend this just as long this is age-appropriate for you.


Reviewed by Hannah Rachel, Grade 10
Glendale Central Library
Posted by Teen Speak at 10:13 AM No comments: