When the Emperor was Divine by Julie Otsuka 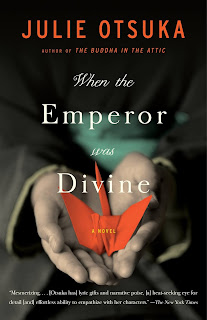 The novel "When the Emperor Was Divine" tells the story of a Japanese-American family separated and incarcerated after the outbreak of World War II. The novel begins in Berkeley, California in the days leading up to the forced relocation and follows the family until their return after the war. The first chapter comes from the perspective of the mother. She has been packing for nine days after first seeing announcements requiring all people of Japanese descent to report for relocation. She completes the majority of her work while the children, a girl, and a boy, are in school. Some of the tasks she completes would upset the children, so she does these while the children are away. She must complete these tasks alone because her husband is away, having been arrested immediately after the Japanese bombing of Pearl Harbor.

The second chapter comes from the perspective of the eleven-year-old daughter while three of the family members are on an eastbound train. The family has been confined at a horseracing track for the past four and a half months, and now they are on their way to a relocation camp in Utah. The girl observes events on and off the train as if she is on an adventure rather than on her way too long confinement. The third chapter takes place inside the Topaz War Relocation Center in Central Utah. It comes from the perspective of an eight-year-old boy. He understands things as an eight-year-old, but the reader will gather far more than the boy. In addition to witnessing events and conditions inside the camp, the narrative from the boy's perspective tells a great deal about his love for his family and his intense longing for his father who is imprisoned at a camp in New Mexico.

The fourth chapter of the novel is set back in Berkeley and begins immediately after the family returns to their home. It comes from a first-person plural perspective, and it is a collective perspective of both children. The children are wiser and perhaps a bit cynical as they observe how conditions and attitudes have changed during their absence. While they had been wealthy before being relocated, they now have no financial assets beyond owning their empty and ransacked home. Employment prospects for Japanese-Americans are few, and the family must work hard just to survive. The father is finally released and joins the family at home in Berkeley. The children struggle to try to understand how their father, though still caring, has changed such a great deal in their years apart. The fifth and final chapter is distinct from the previous four chapters in that it comes from a singular first-person narrator, the father. This short but powerful chapter illustrates the father's views on having been accused of being a dangerous "enemy alien" and taken from his family and his livelihood. The chapter could narrowly address those who made him suffer, or it could address all who allow themselves to think in stereotypes. The final chapter also serves as a sort of epilogue for all those who were wrongly incarcerated based on national origin.

I loved the book. It was great for people who went through the challenges of immigrating from their home country to better their lives. Whoever went through immigration, reading this book will make them feel not being alone, that many people went through it and still are. It is also great for people who didn't experience the difficulties of immigration to understand how hard it is and support those immigrants and not be disrespectful to them. This booked really showed how families would go through many difficulties to better their lives and brighten their children's future.

Posted by Teen Speak at 2:57 PM No comments:

Labels: Historical Fiction, Julie Otsuka, When the Emperor was Divine

Class A by Robert Muchamore 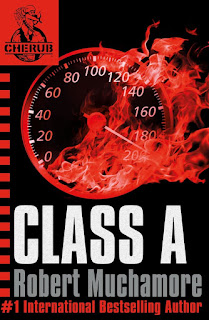 The largest cocaine smuggling ring in the United Kingdoms has gotten out of hand. Cherub is here to stop it. For years the British Police as well as the MI5, a British domestic intelligence organization, have tried to shut down the ring, The KMG, as well as their leader Keith Moore for years. The British government has finally decided to send in Cherub, an elite force of children that are trained to take on missions an adult wouldn't be able to do. Now, James and his team must befriend the children of Keith Moore, and infiltrate his highly secretive organization before it's too late.

Class A is kind of a book that I'm on the fence about. The first couple of times that I've read it, it was really enjoyable, but to be honest, after a few reads, it gets stale. This book, like many others in the Cherub series is really fun to read because of the realism of the author's writing. The way he writes makes you feel like the situations could really happen, and for sure make you wish what you are reading is true. To be honest, the Cherub series is one of my favorites of all time, and it's not one I'll forget soon.

Reviewed by Julio B., Grade 10
Glendale Central Library
Posted by Teen Speak at 8:57 PM No comments:

The General by Robert Muchamore 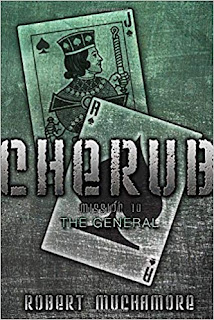 The British special forces have been asked to join a war-game hosted by the United States military hosted in Las Vegas. The war-game is to be played in the largest military training compound ever created. Forty British commandos will be hunted down. What the Americans don't know, is that the British have a card up their sleeve, they plan to bring ten Cherub agents, who are elite child operatives serving Britain's intelligence forces, in order to dominate the game. The United States military up against a bunch of kids, what could go wrong?

Cherub is honestly in my top five book series' of all time. The way Robert Muchamore creates realistic and plausible scenarios throughout the whole series draws me to his writing. The General, which is the tenth book in the series is no different from the rest. Every second of reading Cherub books makes you wonder if situations similar to these are actually going on in the world, and they definitely make you hope that there's more to come. This book is one of my favorites in the series, because you get to see a lot of the characters (who are usually in high stress and dangerous situations) let loose, and have some fun. This is a book that I would definitely recommend.

Reviewed by Julio B., Grade 10
Glendale Central Library
Posted by Teen Speak at 8:53 PM No comments: