Out of the Dust, by Karen Hesse 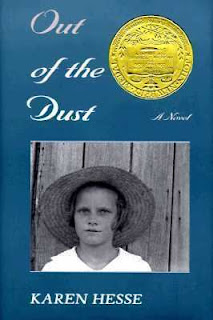 In Out of the Dust, by Karen Hesse, a girl, ironically called Billy Jo, struggles to survive the Dust Bowl. During these harsh years, she encounters dust storms, fires, grasshopper attacks, and other natural disasters. She is also faced with tragedies, like losing her mother as well as her two hands. However, she never loses hope. Will she be able to survive and live to tell the tale? This was one of my favorite books because it showed me to never give up and keep moving forward. I greatly recommend this book to people who are depressed or in sadness.

-Reviewed by JunHyung, grade 7.
Posted by Teen Speak at 2:22 PM No comments: 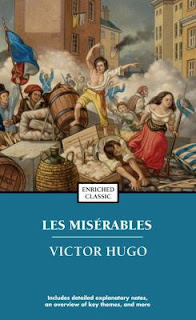 Les Miserables, by Victor Hugo, is about the convict Valjean who is released from prison after serving 19 years in France for stealing a loaf of bread. Once free, he asks around for shelter, but no one except the kindly bishop gives him shelter. Valjean steals the bishop's silverware and runs away, but is caught by the police. However, the bishop pretends he had given the silverware as a gift. In return for saving him from more prison, Valjean promises to be an honest man from then on. He moves to another town under a new name. Here he invents a new manufacturing method, bringing prosperity to the town and himself, eventually becoming the town mayor. Here he lives happily until his old prison guard, Javert, recognizes him and retakes him to jail. He soon escapes, and moves to Paris with Cosette, a girl of whom Valjean had promised to take care of her mother before she died. Here, Cosette and Marius, a revolutionary leader, fall in love, but Valjean tries to prevent them from meeting in order to protect themselves. Then a revolutionary uprising and barricading begins in Paris. Javert, working now as a spy, is discovered among the revolutionaries and is tied up. Meanwhile, on the streets of Paris, the French army launches its first wave against the uprising, during which Marius is wounded and sends a letter to Cosette, but Valjean intercepts the letter and goes out to save Marius because Cosette loves him. When Valjean arrives at the barricades, he recognizes Javert and secretly sets him free, and then tries to take the wounded Marius through the sewers to his grandfather's home. But when they get out of the sewers they are spotted and arrested by Javert. Javert, not knowing whether to do his duty or repay Valjean for saving his life lets Valjean and Marius go but then, still confused, jumps into a river and drowns. Marius gets better and marries Marius, and Valjean confesses his past. Then Valjean falls ill and dies.

This story was not only entertaining and fun to read, but also very deep and emotional. Though it was not based on a true story, it was historically accurate in depicting the setting and times, as well as in depicting the uprising. It also explored deeply human emotions, and also law vs. grace. In addition, this book was page-turning and is a must read. I strongly recommend it to anyone looking for something interesting to read.
.
-Reviewed by Manuk, grade 9.
Posted by Teen Speak at 2:19 PM 1 comment: