Adam of the Road, by Elizabeth Janet Gray, illustrated by Robert Lawson 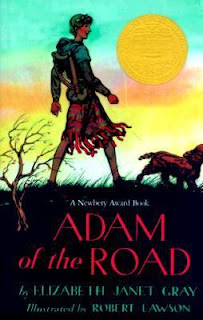 "A road is home to a minstrel," Adam's father says. But the rough roads of early England were also home to bands of thieves and robber knights. Before their journey has hardly begun, Adam's beloved dog, Nick, is stolen and his father disappears. Adam is 11 years old, but he is determined to travel alone, searching the fairs and market towns for his father and his dog. This is a fictional story.
Adam of the Road, by Elizabeth Janet Gray, is one of my favorite books of all time and I like how it describes each detail in the story. I recommend this book to my mother because she loves detailed books and I think she would really enjoy reading this one. I felt so good when I found this type of detailed book.
-Reviewed by Norvik.
Posted by Teen Speak at 9:00 AM No comments:

For Whom the Bell Tolls, by Ernest Hemingway 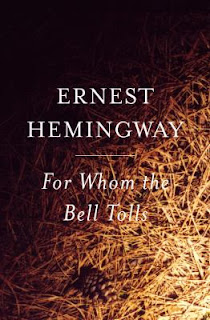 For Whom the Bell Tolls, by Ernest Hemingway, is a classic. Born in Oak Park, Illinois in 1899, Ernest Hemingway was educated there in the public schools. He became a reporter for the Kansas City Star. Hemingway went to Spain in 1937 to cover the civil war for the North American Newspaper Alliance. From his experiences he wrote this classic story of an American, Robert Jordan, who fought, loved, and died with anti-fascist guerillas in the mountains of Spain. In my opinion, this is the best book I've read because there is a song made by Metallica with the same name. Now that I've read the book, I love it so much that I can recommend this book to every single one of my friends. Dear author, thanks for this lovely book. -Reviewed by Norvik
Posted by Teen Speak at 9:00 AM No comments:

The Faceless Ones, by Derek Landy 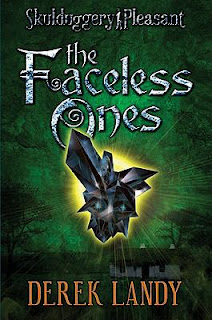 The Faceless Ones, by Derek Landy, is the 3rd of the Skulduggery Pleasant books. Valkyrie Cane, a girl known as Stephanie Edgley to most normal people, is a sorcerer, or to be specific, an Elemental. She can manipulate earth, calm water, push at the air, and throw fireballs. Her companion, Skulduggery Pleasant, a skeleton who told Valkyrie about the world of magic, is also an Elemental and they seek the person who is murdering Teleporters (sorcerers that can magically teleport somewhere).

As Valkyrie and Skulduggery search, they find the last remaining Teleporter, Fletcher Renn. They also figure out that a person with the name Batu is looking for him. Batu hopes to use Fletcher to open the gateway that brings the horrible gods, the Faceless Ones, into this world, effectively taking over the world and also ending it. Valkyrie and Skulduggery both try to stop them, but to make things even worse they're declared fugitives. Will they succeed in the impossible mission to stop the Faceless Ones from coming back?

The Faceless Ones tests the limits of imagination as Valkyrie and Skulduggery venture on into things of impossibility. It is funny, quickly animated, and for the first time has a twist in the end. It is highly recommended for readers who hunt for magic. 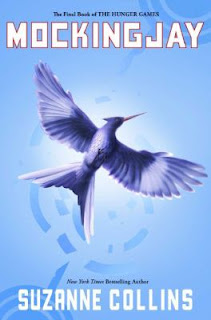 Mockingjay, by Suzanne Collins, is the final book in the Hunger Games Trilogy. Katniss Everdeen, "the girl on fire," survivor of the grueling Hunger Games and the Quarter Quell, lost her home, reunited with Gale, had Peeta slip beyond her grasp, and discovered that District 13 exists all in the same day. The revolution is brewing against the Capital and the rebels need Katniss to be their Mockingjay. Katniss consents to this, and that is where the trouble begins. Peeta, captured by the Capital, suddenly appears on the screen, urging Katniss to hold back the rebellion. However, Katniss, the spark of an uncontrollable forest fire, is unable to do so. So instead, she sends a rescue team and brings back Peeta. But Peeta is already out of reach. He has been hijacked, his memory tampered with. Now, Peeta is convinced that Katniss murdered his family, District 2 shows motives of siding with the Capital, and the Capital still seems impenetrable. Will Katniss and the rebels sucessfully deal with these tasks? The finale of the series, Mockingjay wraps up the adventure of Katniss, Peeta, and Gale. The inevitable fight between the Capital and the Districts draws closer. Action-packed with humor, thrills, and suspense at every twist and turn, this book is for every teen on Earth. -Reviewed by JunHyung, grade 7.
Posted by Teen Speak at 9:00 AM 14 comments: