The Scarlet Letter, by Nathaniel Hawthorne 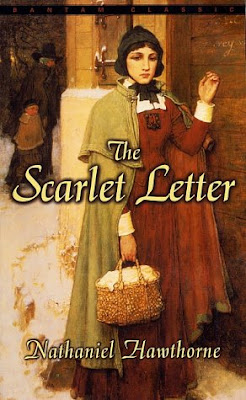 The Scarlet Letter by Nathaniel Hawthorne is about a woman named Hester Prynne who lives in 17th Century Boston with her daughter Pearl. She wears the letter "A" on her chest, which means adultery. Hester is known in the community for adultery, and she is ignored by many and looked at differently. Hester's husband, a man much older than she, sent her to Boston and never came back. It was said that he had been lost at sea, and Hester thought she would never see him again. Hester apparently had an affair and had a baby, but would never reveal the true identity of her lover. Hester's husband comes back with the name of Roger Chillingworth, who is known as a physician in society. Hester finds out that the man is her husband and swears not to tell anyone. Roger is seeking revenge and does this by trying to find out who the lover is. Once he does, he finds out it's a man named Dimmesdale and does everything he can to torture him by his words. Chillingworth turns out to be successful, and Dimmesdale stands on the scaffold where Hester was once standing on and was given the letter "A." Hester and her daughter Pearl see Dimmesdale, and the three of them stand on scaffold and link hands. People realize that Dimmesdale has changed, and Hester asks Chillingworth to stop torturing Dimmesdale, but he refuses. Dimmesdale confesses his sin and dies. A year later Chillingworth dies as well. Hester and Pearl leave Boston, and no one knows what happened to them. Hester continues her charitable work and receives a letter from Pearl who has married a European man and has established a family of her own. Hester dies and is buried next to Dimmesdale. The two share a single tombstone, which bears a scarlet "A." I personally enjoyed reading this book. It is a good book for high school students and has very exciting and dramatic moments. This book keeps the reader busy and excited to read the next chapter and to see what happens next. I would recommend this book to anyone, and I believe it's a very exciting book to read. 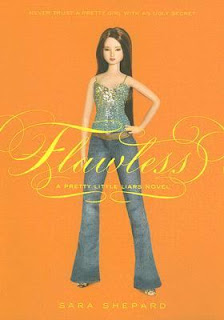 Flawless, by Sara Shepard, is the second book in the mind-boggling Pretty Little Liars series. This book picks up right where the last one left off, but with a little flashback that reveals some interesting little secrets. Still mourning Ali's death, all four girls meet up at her memorial. They discover that all of them have been receiving frightening messages from someone who calls themself A. Toby and Jenna, the girl they blinded, are shockingly at Alison's memorial and the Liars have a hunch that Toby is A. Aside from that, the girl's lives are more complicated than ever.  Aria might not be with Ezra anymore, but now she's developed feelings for Sean, Hanna's ex-boyfriend. Her parent's relationship however just gets worse and worse, and A is threatening to tell the secret that could destroy her family for good. Spencer's parents are still angry with her and her grades are going down. She's still seeing Wren and A knows secrets that could ruin her life. For Hanna, she's desperately trying to get Sean back, but doesn't realize she's not the only one. Plus, her Dad comes back into her life, but his flawless new family might not want him too. Lastly, Emily is trying to get back her old life. She tries to push Maya out of her mind, but Ben keeps showing up and reminding her what he saw. To prove him wrong, she takes a certain someone to Foxy, but the night might turn out to be dangerous instead of fun. Will Rosewood be mourning the murder of two young girls?


After seeing the television series, I couldn't wait read the books! The first one was great, but kept me wanting more! Flawless proved to be even better than the first book and I certainly have high expectations for the third book. Sara Shepard has a unique way of writing and it was new but very interesting. Each chapter is a different girl's life and feelings, giving you insight into each of their lives. I was thrilled with this book and recommend it to teen girls and anyone who liked the first book or show! You won't regret reading this book.