I Know What You Did Last Summer, by Lois Duncan 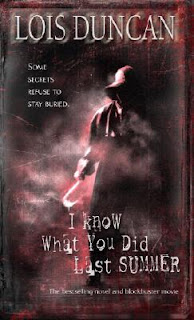 I Know What You Did Last Summer, by Lois Duncan, is about when a girl name Julie gets a letter from a mysterious person, her life and three friends of hers are brought back to the night when they hit the little boy on a bicycle. Their past continues to haunt them with news clippings of the accident taped on doors, weird letters, and mysterious phone calls. But when the driver of the car Berry gets shot out of no where, they think someone found out. Does someone know? Who is stalking them? I think that the book is so much different than the movie. In my opinion, the book was very good compared to the movie. It’s not scary at all, but it’s thrilling instead. I think that it was so stupid and wrong for the main characters to act the way their did. If they did the right thing, those bad things wouldn’t have happened to them. 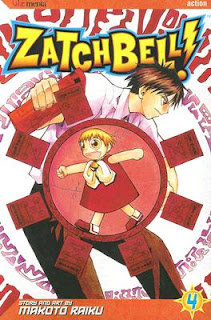 Zatch Bell, by Makoto Raiku, starts in the night, a boy flies through the air hanging onto the talons of an eagle flying towards the city. Zatch Bell is his name. In the morning, a boy's mother starts pounding on his door telling him to go to school. His name is, Kiyo Takamine. Kiyo complains saying that he's smarter than the rest of his junior high, including the teacher. Then Zatch Bell comes through his window saying he shouldn't talk to his mother that way. Zatch had a letter from Kiyo's father, he handed it to Kiyo. It said that his father was proud on his 14th birthday, he found Zatch in a forest in England and cured him, Zatch wanted to return the favor by helping Kiyo. Zatch only had his clothes and a red book and barely any memory of his past. Zatch said he was going to be his instructor and Kiyo had to take care of him. Kiyo had no intention of taking care of Zatch, he was going to punch him when Zatch unleashed a powerful blast and made his room a total mess. Kiyo soon discovers that Zatch is a Mamodo, a child from another planet with powerful magic who will become king of his planet if he defeats all his enemies with the help of Kiyo. Zatch Bell is like and unlike to some of the other anime I have watched and reviewed. For one, its about momodo's again, demons, but not evil. Unlike since they are good and use a spell book to be momodo king. I would recommend this to only anime lovers since Darren Shan fans would think this too boring since they might expect blood and gore.