An Acquaintance with Darkness, by Ann Rinaldi 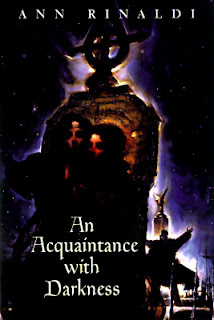 This book, An Acquaintance with Darkness by Ann Rinaldi, talks about a 14-year old girl, Emily Pigbush, who became an orphan after the Civil War ended. Against her dead mother's wishes, she moved in with her Uncle Valentine, a prominent Washington, D.C doctor. Emily soons learns that her guardian is a grave robber. Appalled at this discovery she runs away. What will Emily do next? Emily's story plays out against Lincoln's assassination and its impact on her best friend, Annie Surratt, whose mother ran the boardinghouse where the conspirators met. This book was good. I liked it because the settings are after the Civil War and Lincoln's assassination. I like that it looks at grave robbers and how that furthers the cause of medicine. I recommend this book to all young adults of both genders. 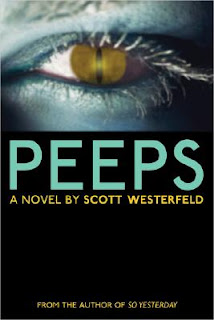 Peeps, by Scott Westerfeld, is about someone who hunts vampires so they don't create more. There is no magic when it comes to vampires, it's actually a disease. Cal Thompson is infected with the parasite but luckily he is only a carrier -- still in control without the worst of the symptoms. But he has infected all of his recents girlfriends who have all turned into Peeps (parasite positives). Now Cal's job is to hunt them down before they create more Peeps. This novel is for readers who like action and fiction stories.