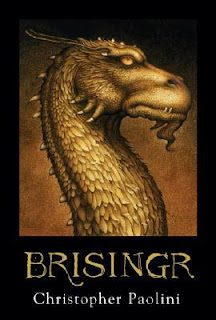 Brisingr is the third book of the Inheritance Cycle by Christopher Paolini. In order to understand this book, you have to read the two books. The story begins with Eragon, Roran, and Saphira at the base of Helgrind, waiting for morning to attack the Ra'zac's lair, and find and rescue Katrina, Roran's fiancee. In the morning, the assault is on! Their group finds the secret entrance to the dwelling, and immediately they are attacked by the Ra'zac and their parents, Lethrblaka. Saphira takes on the two Lethrblaka, while Eragon and Roran attack the two Ra'zac. In the end, Eragon and Saphira prove to outmatch the Ra'zac and their parents, and kill them. Eragon fids Katrina's cell and leaves Roran to break it down.

Meanwhile, Eragon searches other cells and finds Sloan, the traitor of Carbahall. He is blind. Eragon decides not to kill him, and puts him to sleep. Then Katrina and Roran go back to Saphira with Eragon following them. After securing both people to Saphira, Eragon backs away and tells them he has to take care of something. Saphira leaves after much persuasion and aggravation. Then Eragon returns to Sloan and carries him out of Helgrind. Then he sets a spell on Sloan that will make him walk toward Ellesmera without being harmed. Then Eragon set off back to Surda and the Varden. After Saphir returned to the Varden, Arya set out to find Eragon and bring him back to the Varden. They return safely, but had to take care of a group of soldiers in order to return. By then, twelve elf spell caster had arrived to protect, aid, and defend Eragon as well as the Varden. A couple weeks later, Roran and Katrina decide to get married. Unfortunately, their wedding day was interrupted by Empire soldiers, Murtagh and Thorn. The Varden rushed to gather their weapons and armor. Eragon and Saphira flew up to confront Murtagh and Thorn. They fought and Eragon and Saphira were able to best them due to the help of the twelve elf spell castors. However, the Varden suffered heavy casualties from the three hundred soldiers. Galbatorix had laid spells on his soldiers so that they could not feel pain; so they could only die from a head blow, neck hit, or heart blow. Roran and Katrina still got married that day to help cheer the Varden up.

The next week, Nasuada gave Eragon the assignment to go to Twonjheim in her place to make sure Orik was made the next dwarf king (hrothgar was killed by Murtagh in Eldest). He made the journey with Garxhvog, the Kull leader of the Urgals that joined the Varden. Nasuada also assigned Roran to a regiment under Martland. His group's mission was to find enemy supply wagons and destroy them and kill any soldiers in their way. Martland's soldiers went on two missions like this. On the second mission, they faced the soldiers that didn't feel pain, but they still succeeded on their mission. However, Martland's hand got cut off during the attack. So Nasuada transferred Roran to another commander, Edric. Roran was given a small command over soldiers. Edric's regiment was supposed to find a small, evacuated village, and attack the oncoming soldiers. Edric told Roran to charge into the soldiers no matter what, but when Roran saw that the soldiers had crossbows, he halted his men. Then he put archers on the roof and rescued Edric and his remaining men. Edric took some men and went to aid Sand, the second in command, and told Roran to engage the soldiers with crossbows. Again, Roran disagreed and had the archers take them out. Then they charged. Roran took on and killed 193 soldiers by himself, using a spear and his hammer. But because he disobeyed orders again, Edric demoted him. When he got back to the Varden, Roran was whipped fifty lashes for disobeying a direct command from a superior, but he kept his rank.

Meanwhile, Eragon made it to Tronjheim safely and the dwarves were still debating who should be king. After a long meeting of the clan leaders (only clan leaders can be chosen as king. Orik became the leader of the Durgrimst Ingeitum clan), Eragon went walking down the tunnels under Tronjheim to escape from the debate environment. On the way back, he sensed that he and his guards were being followed. And indeed they were, fortunately Eragon and his guards managed to defend themselves and slay their attackers. Eragon and Orik found out that the attackers were from the clan Az Sweldn rak Anhuin. They called a meeting and Orik accused the clan chief Vermund for the attack. The Az Sweldn rak Anhuin clan was banned from existence until clan chief Vermund was replaced or died. Then the meeting decided to choose a king. Orik was elected. Then, Saphira flew to Tronjheim for the coronation, and made the Star Rose whole again, much to the pleasure of the dwarves. From Tronjheim, Eragon and Saphira flew to Ellesmera, where Eragon learned many new secrets. Find them out.

Personally, I liked this book. I think I was amazing. I couldn't stop reading it when I first got it. This book had a lot of surprises and twists. This book is for teens or people who like reading fiction or fantasy.

The Ruins of Gorlan, by John Flanagan 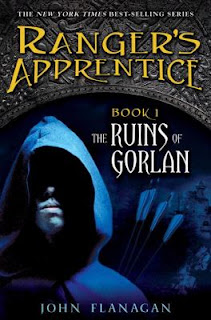 The Ranger's Apprentice, by John Flanagan, starts its series off with book one: The Ruins of Gorlan. At the beginning of this book, orphans in a castle have to schoose their occupation, depending on their skill. Two of the Orphans, Will and Horace, both wanted to be warriors. However, Horace was big and muscular and Will was small. Horace became a warrior and Will was asked to become a ranger. A decision that will change Will's life forever. As Will is being trained in the ways of a ranger, a war brakes out and Will will play a major role in winning the war.


This is one of the best books I have read, and every time a new Ranger's Apprentice comes out, I find myself buying the book as fast as possible and finishing it even faster. At the same time I read this book, I had a big interest in these things: rangers, warriors, wizards, and I enjoyed reading this book. Each page was filled with adventure, and the further into the book I got, the harder it was to put the book down. With each book, I learn many things that I can relate to life. From this book I learned to be more sneaky. This book as well as the series, Ranger's Apprentice, will always be one of my favorites, and I recommend this book to anyone.

One Magical Sunday (But Winning Isn't Everything), by Phil Mickelson with Donald T. Phillips 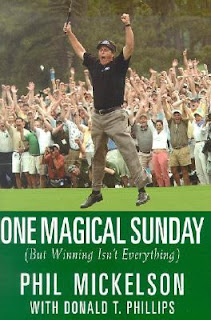 One Magical Sunday, by Phil Mickelson with Donald T. Phillips, describes how Phil won the major tournament victory. Phil was destined to play golf at a very young age. He had a talent that would help him work his way through to become a champion golfer. With a supportive family, great coaches, and determination, Phil won the 2004 masters. Aside from his golf career, he is also a parent of three kids. He finds time to spend with his family and take a break away from golf.

The book titled, One Magical Sunday, is definitely a book for golfers and golf fans. It is a book with lots of good tips and information to help one's golf dream come true. The comments from Phil's family members and coaches help understand Phil's strong desire to become a professional golfer. I recommend this book to all golf players. For non golfers this can give you a head start when playing golf for fun.
-Reviewed by Rebecca, grade 9.
Posted by Teen Speak at 2:55 PM No comments: