The Odyssey by Homer 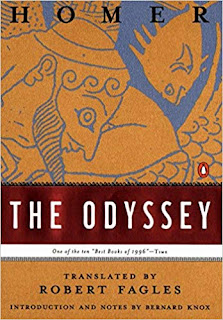 A brave and strong warrior named Odysseus leaves his beloved hometown Ithaca in order to go off to the real world and fight these different, somehow cruel people and odd monsters that decide to go against him in any way when it comes to battle terms. Think of the Cyclops and Eurymachus as examples who come in Odysseus's way. But of course, there will be a time that Odysseus will come back to his hometown for his family and for the fellow citizens living there. He does this after twenty years, and there are some things he needs to do after his arrival such as saving his wife Penelope from a bunch of suitors who desire her to remarry or reconnecting with his son Telemachus. Basically, this epic poem explains the life of Odysseus and what it is like.

I really couldn't understand the whole plot of this epic poem. It took me a while to realize that an epic poem are long poems with many stanzas and lines that tell a story and the thing was there was a lot of them explaining different topics and conflicts in them. At least the ending sounded nice, well from what I've seen in the text's connotation and tone but I still didn't get the whole thing though. But during around the middle of the epic poem, such as the falling action or the climax, it got me somehow interested and appealed into reading it more. I realized that when it came to reading any type of poem, you would have to read it several times in order to fully understand it clearly. Reading all of this in about three weeks to a month, those were the most boring days of my life. I'd rather waste my time reading another piece of material than this again because I just honestly disliked it. If you are a person who loves reading any type of poetry or you want to enhance your knowledge more on literature, then take a look at this and read this kind of content.


Reviewed by Hannah R., Grade 10
Downtown Central
Posted by Teen Speak at 10:51 AM No comments:

Legendary football jock Brett Miller is one of the most popular students at Elkhead High and is dating a girl from the softball team. During this intimate relationship, he meets and somehow falls in love with another guy named Zach. As a result, Brett learns the term "bi" and he is now trying to find another solution to this problem. While walking in the school halls on a very regular school day, he sees another guy his age getting bullied because he is a homosexual which adds more fuel to the fire to Brett's internal conflict of his own since these two boys are going through the same problem mentally and emotionally. How will Brett be able to help this poor man overcome bullying from something he has that certain people wouldn't approve of? Will Brett break up with his girlfriend for another man or just stick with what he has?

From first hearing this book (or I should say reading it), I thought this was going to be a very good one but sadly no. It just sounds so basic. I think anyone would be able to write something better than that which is one of the reasons why the book in general gets a three-star rating from most rating sites such as Rotten Tomatoes and Goodreads. I wish the author could've given a bit more effort in writing this, especially since the books she writes and the author herself isn't even a well-known author yet. Reading this book made me feel kind of mad and disappointed at the same time because of how bad I thought this book was. I honestly think anyone can read this book and maybe hopefully there will be some people who will enjoy reading this even though a lot of people find it bad reading material. I think if this author decides to give it her all and be more creative, she can be a very successful author and have many more stories published.


Reviewed by Hannah R., Grade 10
Downtown Central
Posted by Teen Speak at 10:18 AM No comments: