A Child Called It, by Dave Pelzer 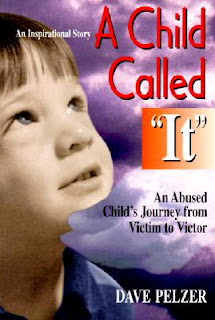 A Child Called It, by Dave Pelzer, is about a boy's intense courage to survive from one of the most severe child abuse cases in California history. When Dave Pelzer was young, he was beaten and starved physically and mentally by his crazy mother who was alcoholic. One day, his mother "accidentally" stabbed him on his ribs for not finishing dishwashing in time. Not only that, his mother starved him for ten consecutive days and tortured him with cold water, burning stove, and more. His helpless dad and his brothers just watched him suffer alone. Despite his age, he learned to play his mother's games in order to survive because she didn't consider him a son, but a slave. Later, a school teacher and a nurse help him out and free him from his mother.

In my opinion, this book was great and it planted a different idea of serious case of child abusing. Before I read this book, I didn't even know this kind of child abuse case existed. I was inspired by Dave Pelzer because he survived and grew to be a successful man even though he was deeply hurt in his heart by his parents and brothers. Thinking about Dave Pelzer's hard times, I learned that I should be grateful for my parents for not starving and beating me. I would rate this book FIVE STARS for his inspiration for many people to fight against abuse cases. Way to go Mr. Pelzer! 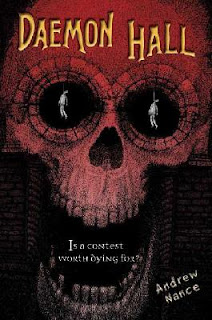 Daemon Hall, by Andrew Nance, is about a famous author who holds a horror writing contest for aspiring young authors. Whoever wins will have their book published. The contest is held in a supposedly "haunted" house called Daemon Hall. However, while the young authors are participating in the contest, horrible things happen in the house that don't have a logical explanation. This book is a bit on the short side, but the content is good. It usually sticks to the plot except when the kids are telling their own stories. The plus side of this book is that it is pretty scary. The minus is that at times it gets a bit boring and confusing. I would recommend it to horror fans and those who like to read about dark humor.

.
Posted by Cheryl, Teen Services Librarian at 12:48 PM No comments: