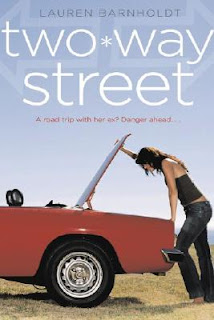 Two-Way Street, by Lauren Barnholdt, is about Courtney and her ex, Jordan. At first Jordan and Courtney are mad in love with each other. They were not the typical couple in high school but they seemed to work out perfectly. They're even driving cross-country together for a college orientation. But out of nowhere Jordan breaks up with Courtney. And for what reason? Jordan tells Courtney that he met this girl on the Internet and that he has lost interest in Courtney. Not only is Courtney extremely confused and hurt, but she is also stuck with Jordan on the road trip. It's way too late to change plans so Courtney has no choice but to sit in Jordan's TrailBlazer for hours. But something seems a little fishy. Turns out, Jordan is keeping a secret or two from Courtney. The secrets have everything to do with their breakup and why they cannot get back together. What exactly is the secret? How can one secret destroy this destined couple? This book has got to be one of my favorite books. This book teaches its readers a very good lesson: there are two sides to every breakup. It's about love and breakups. It's funny and mysterious. It's everything in one. And with that said I recommend this book to teenage girls who find romance and mystery in a book interesting. This book contains many twists and turns, so much so it will get you hooked. It is very intriguing book that keeps its readers wanting more.

.
Posted by Cheryl, Teen Services Librarian at 3:00 PM No comments: 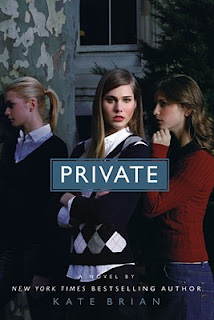 In Private, by Kate Brian, Reed Brennan is a high school sophomore who has won a scholarship to the prestigious Easton Academy in Connecticut. When she arrives at school, she is expecting hoards of glam, flawless girls and cute, preppy boys, but even those notions aren't enough to prepare her for the Billings Girls. The Billings Girls reside in the most exclusive dorm on campus, where all members must be voted in, and are the most affluent, beautiful, and powerful girls on campus. Once she sees them, she is willing to do anything to become a part of the esteemed dorm, including complete fake initiations and tedious tasks, and clean every Billings Girl's room. Once she's in, however, she realizes that the facade of beauty, wealth, and prestige hides something much less glamorous, and very sinister. Although I've read a million fish-out-of-water novels about girls in boarding school, I believe that the Private series is in a class of its own. Although it still has very teen elements, the plot goes far beyond the typical boyfriend-stealing, rumor-spreading nonsense of other books in this genre. I would recommend Private, as well as the rest of the books in the series, to everyone.