The Red Pyramid, by Rick Riordan 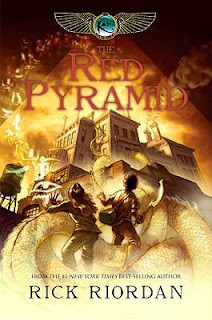 The Red Pyramid, by Rick Riordan, is the first book of the Kane Chronicles. Carter Kane had been living on the road with his Egyptologist father. Sadie Kane had been living with their grandparents. The brother and sister had lived separate lives ever since their mother died, six years ago. On Christmas Eve, the family spent some time together at the British Museum, but not a nice, peaceful, relaxing time. Sadie and Carter's father summons a strange man, who traps their father and destroys everything in room. The two siblings start their quest to search for their father, and discover how many more secrets their parents have hidden them from, about themselves, the world, and the gods of Egypt. What I liked about The Red Pyramid is how it is different from the Percy Jackson series, but still partially linked to it. The book is focused on the Egyptian gods, the House of Life, and the kinds of chaos the monster Apophis can create, but the book also makes references to the Percy Jackson series. In one paragraph, Amos, the Kane kids' uncle, talks about how Manhattan has other gods, how it's best that the magicians and Egyptians gods stay away from them. As he says that, he glares at the Empire State Building. In another part, Thoth discusses how the Greeks confused him with Hermes. He also implies that if you've ever met Hermes, you'd understand why that was offending. This book was also written like a recording, which affected it a little, just enough to make it interesting. If you ever were a fan of Rick Riordan's other books (meaning the Percy Jackson Series,) you probably would like this series as well.

-Reviewed by anonymous, grade 9.
Posted by Teen Speak at 12:00 PM No comments: 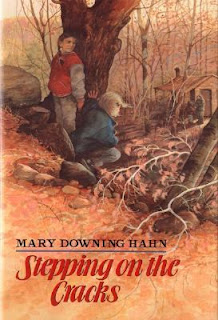 Stepping on the Cracks, by Mary Downing Hahn is about two young girls, Margaret and Elizabeth, whose brothers have both gone off to fight in World War II. While at school, they experience problems with the school bully, Gordy. One day, they follow him into the woods and discover a secret about him. They jump to conclusions and develop an even greater feeling of hate towards him. After Gordy finds out that Margaret and Elizabeth saw him in the woods, he threatens them and makes them promise not to tell anyone what he has been hiding from the world, family, and most especially, his abusive father. Over time, they learn to like Gordy more because of what they learn through his secret.

This story has changed and questioned my view of war and of the human race so many times throughout the story because of the power and message it sends to the people who read it. It also makes ask yourself about bullies or people in your life and why they do the things they do. I have found there is almost always a reason for their actions. I would recommend this book to anyone interested in historical fiction or want to read a book that keeps surprising you with every page you turn.