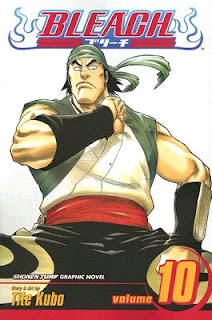 Bleach by Tite Kubo. It all starts with the main character, Ichigo Kurasaki, kicking some skater's butts for knocking over some flowers for a little girl who died there. Ever since he was little, Ichigo has been able to see the dearly beloved. He promises the little girl for some new flowers. At home, he misses his curfew and his dad punishes him. There was another ghost waiting for him, but he had ebough so he goes to his room. The next morning, he sees on the news that there was an inicident on a building nearby. He just walks past it on his way to school, then people start running in the opposite direction, inbluding the little ghost girl, there was a huge creature witha skull face, looming out og an alley, he chases after the ghost girl, thenall of a sudden, this young looking woman wearing black robes jumps in and kills the creature. Then she leaves, Ichigo thought that was strange, at night in his room, he was thinking about her when she came into his room, she thought he couldn't see her, when he kicks her in the back and yells at her and why shes here, he kind of ticks her off, so she uses a paralyses on him. She explains what she is, a soul reaper, and what the creature is, a hollow, they feed off of normal spirits. There was a ghost nearby and she puts the hilt of her sword on the ghost's head and sends him to paradise, she xplains that is what soul reapers do. They hear an explosion nearby, and Ichigo's sister comes through the door, injured, The soul reaper goes after the hollow, Ichigo tells her to release him, but she tells him to stay out of it. He then gets out of the paralysis, which is impossible to humans, she realizes he is no ordinary human, the hollow is holding his other sister and he goes after it, but the hollow punches him to the ground. The hollow senses a powerful spirit inside of Ichigo and tries to consume him, he dodges just in time and the soul reaper cuts him on the arm, the hollow left after that. The soul reaper realized that he had a powerful spirit and was hidden up until now to save his sister. The hollow came back, the hollows came because of Ichigo, he offers himself, the hollow lunges after Ichigo, and the soul reaper steps in to get injured herself, she falls to the ground, the hollow is suffering a few yards away, she gets up, bleeding from a wound. She is too injured to fight, so she gives himm her power by stabbing himself in his center and absorbing her power, becoming a soul reaper himself. She tells him her name, Rukia Kuchiki. He stabs himself just in time to slice off the hollow's arm. Instead of taking half, Ichigo takes almost all of Rukia's power. That was causing all the blockage in Rukia's senses. Ichigo slices the hollow in half, becoming a soul reaper and disposing of the hollow scum. This is another cool, action packed anime with good graphics and plot that makes sense. The characters can relate to the people either watching or reading Bleach. My only question is why the anime is called Bleach, why not reaper or something else cooler. I would recommend this to every one reading Darren Shan or watching anime who haven't watched anime before. 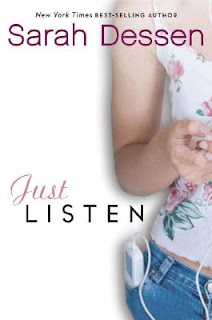 Just Listen by Sarah Dessen is a stunning story of boy meets girl. Annabel Greene seems to have it all; beauty, brains, friends. That's at least what it looks like in her modeling shoots. Annabel is a sixteen year old girl whose life is far from glamorous. Over the summer, she lost her best friend, Sophie, because Sophie thought Annabel hooked up with her boyfriend. Annabel hates modeling now, but stays in it to please her mother. To top it off, her sister, Whitney has an eating disorder that's tearing her whole family apart. With no friends and no hope for herself, Annabel stays to herself at school and home. Then, she meets Owen. Unpredictable, music obsessed, and always willing to tell the truth. With Owen's help, Annabel learns to face her fears and learn to speak up for herself. I really enjoyed this book. Its message really shined through; always speak your mind, stand up for yourself, and just listen. I recommend this book to all girls fourteen and up. It is easy to follow and really enjoyable once you get into it. I give the book four and half stars out of five. Do you think Annabel will overcome her fears and speak her mind? Read Sarah Dessen's Just Listen to find out. You won't regret reading this. Reviewed by CH, grade 9 .
Posted by Teen Speak at 6:49 PM 1 comment: 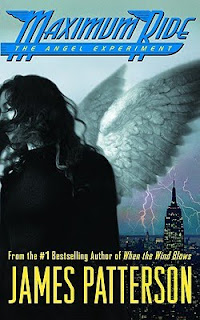 They had escaped four years ago. Jeb, who helped them escape, treated them as their father for two years, but disappeared. Maximum Ride and her family, Fang, Iggy, Nudge, Gasman, and Angel have been alone for two years. They seem like normal kids but are actually only 98 percent human and 2 percent bird. The six kids were genetically engineered in a lab, living like caged rats always being experimented on. Now their main predator, Erasers - half human, half wolf has found them and the lab wants them back. The mission for them is the following; rescue six year old Angel from the lab, find a secret address to track down the flock's missing parents, get revenage on an evil traitor, and save the world. The series Maximum Ride, by James Patterson is about six extraordinary kids saving the world from evil white coats and more. These books are for people who likes lots of adventure, drama, science fiction and face paced stories.