No Safety in Numbers, by Dayna Lorentz 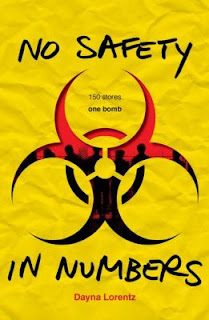 In the book, No Safety in Numbers, by Danyna Lorentz, four protagonists, Ryan, Marco, Lexi, and Shay, find themselves trapped in a mall and unable to leave. They do not know what happened, nor the reason why they are not allowed to leave. They soon figure out that a biological bomb has been placed in the mall and that people are getting sick because of it. Supplies are running out, and the number of people in need of medical attention is rising. However, nobody can still go out. More people are panicking, and the adults are behaving worse than the children. These four protagonists, each with his or her own life threatening situation, find out that they need to change.

This was a certainly a new book for me. It was a whole new style that I chose quite carelessly in our local bookstore. However, it ended up to be high above my expectations. It was filled with suspense, and since I was always interested in viruses and biological studies, it was a good choice for me. I had always wondered what would happen if I was in a public place with a bomb, and this book answered my questions. Chaos, changes in the behavior of people, and a lot of fear. I think many people who enjoy some suspense will like this book, especially kids my age.

Posted by Teen Speak at 3:34 PM No comments:

Freak the Mighty, by Rodman Philbrick 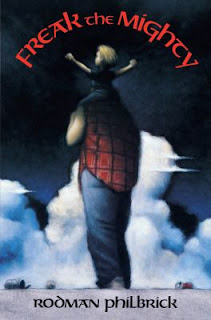 Maxwell Kane is an eighth grader with zero self-confidence, no mother, and a father in prison. Even feared by his grandparents that he would grow up to become like his father, Killer Kane, he was friendless ever since. When he was younger he would kick anyone who tried to comfort him after his mother's death, therefore earning the nickname "Kicker." However, when Freak came along, everything changed for him. Although he first did not quite understand having Freak along with him, he gradually came to enjoy his time with his new buddy. When Max came together with Freak, they were unstoppable. They became Freak the Mighty.

Honestly, at first I was not eager to read Freak the Mighty, by Rodman Philbrick. However, I had to, since it was one of the required books to read in school. Now, it is one of my favorite books. The story between Max and Kevin (a.k.a Freak) is really relatable, especially since the book is written in Max's point of view. Their friendship was really heart-warming, and the book never let me take my eyes off of it. It was filled with surprises, which was one of the reasons why I loved this book. I would recommend it to anyone of any age and reading level, since the book is extremely easy to understand but still has a deep meaning to it.

So B. It, by Sarah Weeks 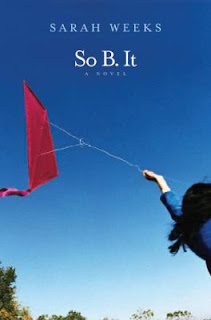 Heidi lives with her neighbor, Bernadette, and her mentally ill mom. She was living fine, supporting Bernadette and her mom by using her unusual luck at a gambling machine. However, when she started to question herself, such as who she was and when she was born, her mom said a word to her. "Soof." Although she constantly asked her mom for the meaning of her word, she soon realized that she would not get an answer by simply questioning her. When Heidi found a file about her family, she decided to set out on a journey to find out more about her grandparents, father, and just who she is in general.

I found So B. It, by Sarah Weeks is very memorable and easy to read. Although the meaning of this book came to me after reading it a couple more times, I finished the book rather quickly and enjoyed it every single time I read it. This book made me feel thankful about having a complete family, and while I was reading it I would constantly put myself in Heidi's point of view. When I found out the meaning of the title in the end, I was very surprised. I especially liked the ending, and I would recommend this book to anyone who likes a nice heart-warming story.

Posted by Teen Speak at 3:33 PM No comments: