The Upside of Unrequited by Becky Albertalli 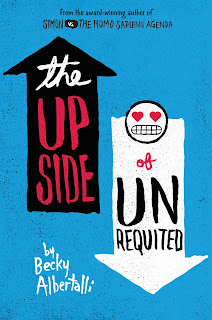 This story involves the family of Abby, the character from the previous book "Simon vs. the Homo Sapiens Agenda". She has twin sisters Molly and Cassie as her cousins. The two sisters can be both similar and different at the same time such as looking for a soulmate that is destined to be with them. Cassie is a lesbian who has dated so many females and possibly has other desires on what to do with them. Molly on the other hand is a straight female who has had approximately twenty-six crushes and never gotten a boyfriend yet. Cassie's goal is to help her sister get the right soulmate for her with the help of her best friend Olivia. Will Cassie be able to accomplish her goals? Or will staying single just be the case?

Reading the book didn't really attract me. The plot just sounded really weird and ironic for a sequel. The cover looks really cool though, with having blue, black, and a splash of red to it just like the first book. What I thought of was maybe the author could've made the sequel something like the first book. Examples would include using the exact same characters or adding an exclusive scene to it. The book also contained sexual gestures that isn't appropriate for preteens. In my opinion, I think this book should be age-appropriate for teens 16 years of age or older in order to read this because if I were to read this to someone who is way younger than me, they may not be able to get the main idea of the story.

Ruin and Rising by Leigh Bardugo 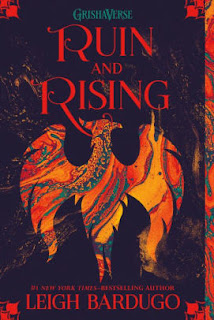 Ruin and Rising by Leigh Bardugo is the last novel in her Grisha Trilogy. The Darkling has won- Alina is under the "protection" of the Apparat, a man who leads a cult that worships Alina. The Darkling has expanded the Fold, and Ravka and its surrounding countries are entirely controlled by him. Hiding in the ancient tunnels of the country, Alina and her supporters must find a way to the Firebird- a mythical creature that is also the last of Morozova's amplifiers. With all three amplifiers enhancing her power, Alina would be able to destroy the Fold and the Darkling. Based on clues and the tracking ability of her friend Mal, Alina must find the last amplifier and face the Darkling one last time.

I really enjoyed the last installment to this series. I thought it was a fitting end to the entire series. Like her other books, Ruin and Rising was also full of action and plot twists. It was another enthralling read. Each of the characters were realistic in their thoughts and actions, and the internal struggles that Alina had were also explored in detail, more so than the previous book. This novel made me think of greed and how far some people would go for power. Readers of the books in this series would definitely want to read this book and complete the full story. However, any reader of fantasy and magic stories, as well as action stories would love it too. I would definitely recommend reading the previous novels, as that way the story would make much, much more sense. Ruin and Rising was an amazing ending to the trilogy.

Siege and Storm by Leigh Bardugo 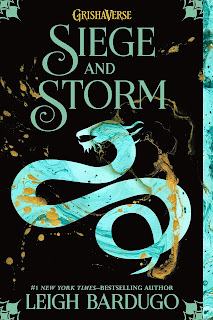 Siege and Storm by Leigh Bardugo is the sequel of the previous book, Shadow and Bone. Alina Starkov has escaped with Mal across the True Sea, hunted by the Darkling. The Darkling has emerged from the Fold with another horrifying power- the ability to create life itself, a forbidden magic. When Alina and Mal are finally caught by the Darkling and his hired help, a notorious pirate of Ravka, they manage to escape. Alina decides to gather the rest of the amplifiers, three magical charms that would boost her power enough to face the Darkling and win. But as her power grows, she finds herself drawn deeper into the dark magic of the Darkling- and begins to understand his greed. With Ravka's fate in her hands, Alina must choose the right path and not give into her greed.

I enjoyed Siege and Storm and thought it was a great continuation of the series. It was filled with action and betrayal, and was hard to put down. I especially liked the struggles that each of the characters had in their minds- such as Alina's conflict between choosing a life with Mal and unsatisfied power or joining the Darkling and having all the power she wants. I enjoyed the realism of the characters and the detail that was put into the novel. The settings were described very well. I think that readers of fantasy and magic novels would love this book, and readers of Bardugo's previous novels would like it too. However, I would recommend that you read the previous novel first. I liked reading this novel and I hope others enjoy it too.


Reviewed by NK, Grade 10
Montrose Library
Posted by Teen Speak at 11:53 AM No comments: