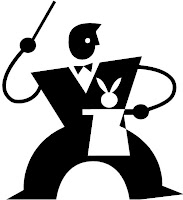 The cast of The Illusionist was very well picked for the part. Edward Norton, Paul Giammatti, and Jessica Beil all played their roles with a near flawless performance. Eisenheim played by Edward Norton is a mysterious magician who is accused of dark magic. In the beginning is a flashback of a perfect world where Eisenheim is a poor child who finds love of a rich princess. They aren't allowed to be together, so she is taken away. Later he finds her again and the plot thickens. The movie keeps you guessing until the very end. The movie was a bit dark and confusing, but it made up for it through the jaw dropping acting. Check this movie out!

[Librarian’s note: This movie was based on the short story, “Eisenheim the Illusionist,” by Steven Millhauser. It can be found in his short story collection, The Barnum Museum.]

.
Posted by Cheryl, Teen Services Librarian at 3:27 PM No comments: