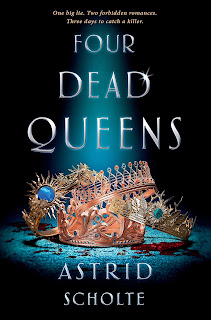 Four Dead Queens is about a girl named Keralie who works for a criminal and spends her life following his orders. She also had personal affections to Mackiel, her criminal boss. One day, she was assigned to steal a comm case for a boy named Varin. Little did she know, that stealing this would change her life. Meanwhile, all of the Quadara's queens were being murdered, the anonymous murderer killing each one gruesomely. Keralie and Varin join forces once they both find out the message inside the comm case would affect life on Quadara forever.

I really enjoyed reading this book because I personally love fantasy and teen fiction books. This book went into depth with all its details and plot twists, it was like experiencing a dream or being in another world when reading Four Dead Queens. I loved how this book continued to change perspectives, sometimes in the view of the main character or sometimes in the view of a minor character. This really helps readers understand what is happening more clearly. If I were to rate this book from a one to ten, one being terrible and ten being one of the best books I've ever read, then I would rate it a nine.

The Pioneer by Bridget Tyler 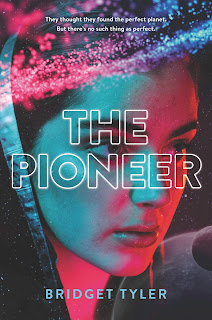 After an accident caused Jo to give up her dreams of being a pilot, she feels lost. But when she arrives on the planet of Tau Ceti E, she is excited for a fresh start on a seemingly perfect new planet. However, everyone seems to be hiding something- a secret about the planet itself. When a ship crashes and Jo is forced to make First Contact with two sentient alien species she wasn't told about, disaster strikes. Humanity is caught up in a war between aliens, and Jo must make it back to base camp to make sure they don't make it worse.

I enjoyed reading this novel. Many of the ideas and the story of interstellar travel and sentience were very interesting to read about. The story was also very captivating- there was a lot of suspense and action, along with betrayal and chaos. However, I felt as if the story finished off as a cliffhanger- which might be remedied by a second book. Also, some parts of the novel felt too shallow or unrealistic, but it was still a fun read. People who like space travel, aliens, and futuristic action would probably like this book. Overall, I would recommend this book to people who want a great, action-packed read.

Posted by Teen Speak at 4:34 PM No comments: