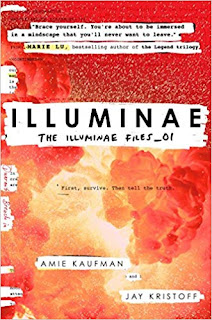 Illuminae, by Amie Kaufman and Jay Kristoff, is a science fiction story about determination. The main character, Kady Grant, is a high school girl living on the planet of Kerenza, where her parents work for a highly illegal mining company. A rival corporation, Bei-Tech, finds out about this illegal mining city, and instead of reporting them, decides to bomb them with biological weapons- they want these resources for themselves. Many of the civilians make it off-planet in launch ships and send mayday signals, and a governmental ship, the Alexander, shows up. The ensuing battle between the Bei-tech ships and the Alexander leaves the Alexander extremely damaged- its AI is haywire and dangerous, and it cannot open a wormhole gate to leave the area. Against all odds, Kady has to help the insane AI defend the civilians.

I thought that Illuminae was an interesting, well written novel. Instead of being written through third person, it is an amalgamation of text message logs, commentary on security camera clips, and audio files that is initially strange, but unique and still easily understandable. I think that people who enjoy science fiction novels would very much enjoy this novel- it has space travel, engineered diseases, and a crazy artificial intelligence. This novel was very tense and suspenseful, which I think made it hard to put down. I would definitely recommend this book. 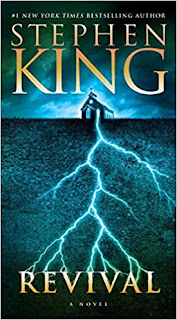 Revival by Stephen King is a horror novel, revolving around the ideas of death and addiction. The story starts off with the main character, Jaime Morton, meeting the new pastor in town, Charles Jacobs. The entire small town comes to love Jacobs, but that all changes when his wife and son are killed in a car accident and he renounces the idea of a good, benevolent god. During the course of his life, he experiments with what he calls "secret electricity"- an energy that seems to be able to heal many injuries- even including paralysis. Jaime, now grown up, becomes a heroin addict and is cured of his addiction by Jacobs. However, upon further research, Jaime finds that everyone who has been healed by Jacobs has strange side effects and oftentimes commit suicide later on in life. Jaime sets out to stop Jacobs from "healing" others and finds out that Jacobs wants to do one ultimate act- bring a woman back from the dead and see what fate had befallen his wife and son.

I enjoyed this novel. The way King set up the whole story, from the start of Jaime's life to his old age, was well executed, and the dark, almost evil tones of the novel drew me in. I thought that the ideas in the book were rather grim and depressive, but that was to be expected from King. The characters in this novel were also very well fleshed out, and their motives were very intriguing (think of Jacobs studying his "secret electricity" in order to see what had happened to his wife and son). I think that young adults or adults interested in Lovecraftian fiction would especially enjoy this book. I think that this novel was an interesting read and I would definitely recommend it to others.