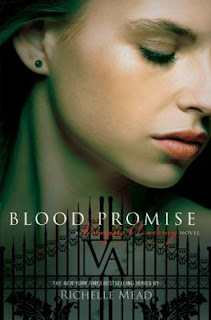 Blood Promise, by Richelle Mead, is about recent attacks on St. Vladimir's Academy that have left many dead and others turned. Rose lost a part of her when Dimitri, the love of her life was taken. Now Rose will do anything to get him back. Reaching to any heights will involve traveling to his hometown in Siberia. Through Adrian she funds herself into one of Russia's most elite night clubs and through various sources travels to his childhood home. The guilt of leaving Lissa back in everything going on back home. So when Avery Lazar comes to the academy her first instinct is to protect Lissa. The only problem is that they are an ocean and continent away. This entire time Roses main task of finding ands killing him is getting even more unbearable. Is it time to finally join him in eternal life?

This is the fourth book in the Now York Times best Selling series Vampire Academy. This is a series in which everything is predictable through foreshadowing. Richelle Mead is a self proclaimed genius for bampire stories. She makes sure that the reader is never bored. Most of her stories are left as cliff hangers and that cachet the reader's undivided attention. This story is one that no one ever expected. With Rose over seas traveling to find Dimitri, the plot can change through her travels. The pattern that the plot portrays is caught if you read the book very carefully. Read this second to last book and see if the plot makes you wonder. What will happen next?

One Flew Over the Cuckoo's Nest, by Ken Kesey 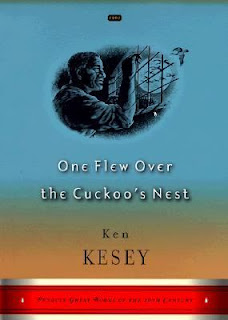 The novel, One Flew Over the Cuckoo's Nest by Ken Kesey, was written about a fun-loving rebel named Patrick McMurphy. He is sent to a mental hospital instead of prison. There he pushes the authority of Nurse Ratched, who demands complete submissiveness. His defiance develops into a bleak struggle between the two. This book really makes you think about morals and procedures. It shows the thin line between how much is too much. I recommend this book to anyone who's interested in dramatic black humor.

-Reviewed by Jackie, grade 9.
Posted by Teen Speak at 5:08 PM No comments:

The Angel and the Sword, by Cecelia Holland 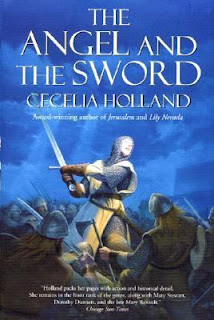 "The Angel and the Sword" by Cecelia Holland is set in the dark and bloody days of the ninth century. A courageous young princess named Ragny runs away from the castle and disguises herself as a brave warrior, and also as a man, to get away from her father after her mother died. Since Markold, her father, doesn't have royal blood, so he has to marry in the family. He tries to force Ragny to marry him, but she escapes, with Markold's second hand man, Seffrid, accompanying her along the way. On the way to Paris, they meet a group of travelers. There's a man named Leovild there, and sson she falls in love with him, though he still doesn't know "he's" a she. When they reach Paris they realize they have to defeat Vikings for the town to finally ne at peace. Will they ever stop the war? Will Leovild realize Ragny's a woman? Has the princess truly escaped from her evil fathers clutches? I really enjoyed this book, and I'm sure others will also.