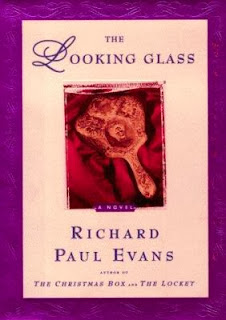 The story speaks about an ex-preacher named Hunter Bell who left the church after losing faith in God and living life gambling when his wife died from giving birth and about a woman named Quaye McGandley who was sold by her parents during the Potato Famine in Irish to America. These two go through harsh conditions in life as they meet together and fix their broken hearts and fall in love.

The Looking Glass, by Richard Paul Evans, was one of the most captivating book I have ever read. Once you start reading, you can't put it down. There was not a single thing I didn't like about this book. I think many people would like this book if they were investing in a really good book to read. The book made me think that people can beat the odds, like Quaye, who was sold from her homeland to America and abused by her husband and like Hunter who lost faith in everything after his wife's death, but they beat the odds as they fall in love together to fix their broken hearts. Overall this book is possibly my favorite book of all time. I would keep this book in my shelf forever. That's just how good this book was. 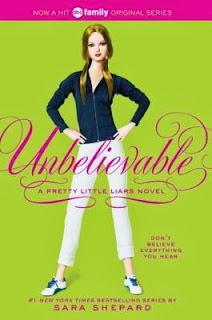 Unbelievable is the fourth book in the Pretty Little Liars series by Sara Shepard. This book picks up right where the last one left off. Each of the four girls (Spencer Hastings, Aria Montgomery, Hanna Marin, and Emily Fields) are dealing with their own personal nightmare. Will their troubles ever end? Well in this book, they just might. Will the girls get closer and closer to not only revealing A's true identity, but finding out who really killed Alison DiLaurentis? But how will the girls narrow down it down when everyone seems to be a suspect? Who can they trust?

Oh my, where do I start with this book. This one was by far the best of the series. Every single possible problem that could happen occurs but I like how the author shows the characters persevering and how they manage to pull through with everything. It's not a peaceful ending and that's what makes the book even better. It has so much action and drama, you can't put the book down. When things finally seem to make sense, you're once more thrown off and that's my favorite things in books. The ending is just perfect and it's not typical. 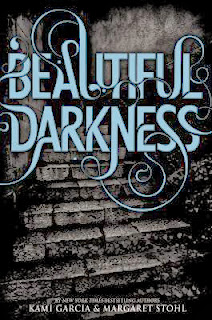 Beautiful Darkness, by Kami Garcia and Margaret Stohl is the second amazing installment in the Caster Chronicles. After the death of her uncle Macon, Lena's mourning has driven her to depression. For obvious reasons she blocks out everyone in her family, and most shockingly, Ethan. The events of her sixteenth birthday had lasting effects on everyone, the most negative of them on Lena. She starts to hang out with the wrong crowd, Dark Castors. Ethan is being ignored by Lena, and on top of that, he's getting weird visions with unbelievable details. With Lena's worrisome behavior and the odd visions, Ethan just doesn't know what to do. Will he need to enlist the help of a lifetime friend?

After reading "Beautiful Creatures" I was extremely pleased and was delighted to find out there was a sequel. I had high hopes and was even happier when they met! Kami Garcia ended Beautiful Creatures with a hint to what Beautiful Darkness would be about, but I never expected the bombshells that were revealed! I love the unique details Garcia incorporates into the novel and her writing style. One of my favorite aspects of the book is Ethan's and Lena ability to Knelt, communicate with their minds. I think that the third book will be even more amazing than the rest and can't wait to read it! I recommend this series to anyone who enjoys a dangerous forbidden romance.

The Call of the Wild, by Jack London In The Call of the Wild, by Jack London, a abnormally large and powerful dog named Buck lives happily with his owners in Santa Clara Valley in California. His whole life changes when he gets taken away to get sold at Canada. He gets trained as a sled dog, but the other dogs there aren't exactly friendly. He has learned that he has to fight for everything against other dogs. He has never even laid a single paw against any type of animal. But he soon finds out its fight or be killed. Will Buck answer to the Call of the Wild?

The book was FANTASTIC! It makes any book look like its been written by a amateur. The book explains the dogs mind so well. It can also be sad at some times and in a way, kind of dark. Well it is survival of the fittest after all. Its fun to watch something like Buck, a kind dog that would never hurt, into a fierce sled dog that must fight to survive. It was heavily detailed, and great in explaining the plot. I would recommend this to teens, because a child well won't understand what is going on in the plot, because of the way it was written. Read it. It is marvelous.