Fast Food Nation: The Dark Side of the All-American Meal, by Eric Schlosser 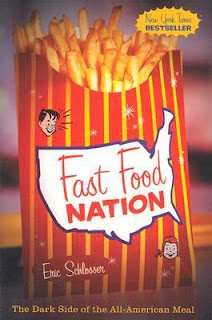 In today's day and age, do we really know what goes into our bodies in the form of 'food'? Do farms still consist of red barns with acres of grass and livestock, or are hormone-fed animals crammed into cages inside of windowless, steel-walled factories? Eric Schlosser's Fast Food Nation: The Dark Side of the All-American Meal thoroughly investigates the fast food system of America, ranging from its history to its current standing with the public. Not only are shockingly gruesome details revealed about the food industry in our country, but the 'why' and 'how' are discussed as well. Schlosser identifies the corporate motives behind America's fast-food industry, linking companies like McDonald's and Burger King to Disney and other gargantuan foundations. Furthermore, he writes about the greed of these huge food companies and how they are completely devastating small-business owners with family farms and less industrialized means of food production. In a time when the concern for food safety and production is every important, Fast Food Nation is an essential novel for all.

I can truly say that reading this book has completely changed my total outlook on the food industry and the way I eat. I can no longer pass by a large-name franchise without contemplating all of the points discussed by Schlosser in the novel. Not to mention, some of the details revealed in the novel do not exactly encourage the fast food supplied to the masses in America, ranging from health reasons to quality of nourishment. As a health-conscious individual, I am grateful for Schlosser's valid investigation into the food industry and I encourage everyone to read this novel! 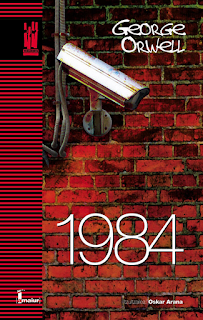 Nineteen Eighty-Four is a dystopian novel by George Orwell covering the story of Winston Smith, a citizen of the nation of Oceania. Oceania is ultimately ruled by Big Brother, an individual so often praised and honored but with no proof of existence. However, one thing is certain; Big Brother is everywhere and anywhere at all times. Every member of Oceania must follow the strict guidelines set by the divine dictator, and there is no way around him. The heavy propaganda provided by the authorities of Oceania work to keep the public blindly in worship of the tyrant, and any opposition to his rule is immediately shut down. However, Winston soon starts to wake up and realize that something is incredibly wrong with his society, and he inches his way into becoming a rebel of the society. In addition, his growing relationship with a young woman, Julia, adds to his list of threats to the power of Big Brother. Read the novel to find out what happens to Winston Smith. Will he be able to outsmart the tyrannical authority known as Big Brother, or will he ultimately be doomed to defeat and destruction?

I have a great fondness of George Orwell's dystopian novel, Nineteen Eighty-Four. In fact, I often find myself quoting it in essays, freelance writing, and even everyday conversations. There are so many valuable lessons to be learned from this novel, whether from its statement on the growing power of authorities through technology to its questions on life and love. Although the year of 1984 has come and long gone, this novel remains a timeless classic that would be just as significant in the old societies of the Romans as it would be in a social democracy thirty years from now. Pick up this novel, I promise you won't regret it! 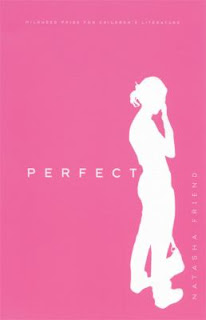 In Perfect by Natasha Friend, Isabelle Lee has a problem. She has a broken family and so, she lets her emotions out by throwing up. Her father had died, her mother is depressed, and she is forced to attend "group" because her sister had caught her with her fist in her mouth and told on her. Eating Disorder and Body Image Therapy Group becomes interesting when she runs into Ashley Barnum: Miss Popularity. Isabelle wonders why Ashley would ever be in "group" when she is already perfect in every way. They become very good friends and they eat and vomit together, every chance they get. Soon, Isabelle discovers the secrets of being able to stop and think about how she feels and what throwing up does for her.

I could relate to this book because I have a single mother and I am very conscious towards my weight and body like Isabelle. I enjoyed this book because of the truth and real scenarios that most teens would be able to recognize in an instant. There are real problems and families out there with heart-breaking situations who deal with a lot, and still manage to go through each day as if they are 'fine' when inside, they are dying. You would change your perspective on how you deal with problems and judge people.

The Clockwork Angel, by Cassandra Clare 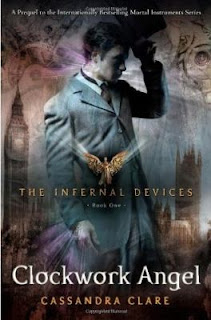 The Clockwork Angel, by Cassandra Clare, is about a 16 year old Tessa Gray who travels overseas to England to find her missing brother, Nathaniel who hasn't come back from his trip. On her journey to find her brother, Tessa Gray discovers an extraordinary world of downworlders. There were all kinds of creatures. Vampires, Warlocks, and other strange figures were roaming around the streets. This place was totally different than the casual England itself. Tessa is suddenly captured by the Dark Sisters, the evil machines from the Magister of the downworlders. She demands them to tell her where her brother was. The Dark Sisters would not tell her and she was trapped. Finally, a handsome 17 year old her, Will busted inside with Jem by his side to save Tessa. Will used his dark magic to defeat the Dark Sisters. They were defeated at the moment, but weren't gone for good. They appeared everywhere looking for Tessa. The Magister wanted Tessa's amazing power: the ability to change her physical form to another person. About halfway through the book, Tessa found out that the Magister possessed her brother and that he was not her brother anymore. He was part of the evil downworlders. After finding out the harsh reality, Tessa went on to bring her brother back. Will she succeed in rescuing her brother?

This book has brought me to a whole different world and perspective of unknown magic. I recommend this book because it contains a mixture of romance, comedy, suspence, action, and mystery. Once you open this book, it will be very hard to put down. I got so glued to this book I couldn't do anything else. This book should definitley be a part of a teen's reading list. I love how Cassandra Clare added in the fact that Tessa had her own powers which has a big effect on the story. Tessa's power is what draws the Magister towards her. Her powers create the conflict of the whole story. The language that the characters use really tell the readers that they are really from England. The charm that Will has is described so detailed, I could almost picture him in my head. The way the author introduces characters is very rare and unique. Just by reading the descriptions she gives, readers will know the characters really well throughout the story, as if they knew them since a long time ago. The Clockwork Angel is a combination of many of the literature genres that can catch anyone's attention at any age.