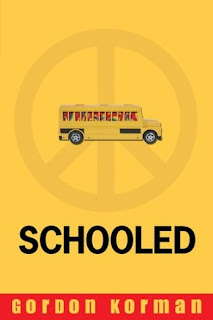 Once there was a teenage boy named Capricorn Anderson. Everybody called him “Cap” for short. He was living with his hippie grandmother, Rain, in the farm community of Garland. One day, the police arrested Cap for driving their pickup truck without a license. When they asked him where he was going, he told them he was taking his grandmother to the hospital because she fell out of a plum tree. Soon after, they unlocked his handcuffs and he was free to go. The ambulance took Rain to the hospital because she had broken her hip while falling out of the tree. When they took his grandmother to the hospital, Cap was forced to live live with his social worker named Mrs. Donnelly.
Soon after, Cap began his new school at Claverage Middle School. Zach Powers was the school bully who had removed the letter “l” from the word “Claverage” and now the school sign read as “C average Middle School.” Cap was a hippie boy who wore tie-dyed shirts and corn husk sandals.
Zach thought that Cap was the perfect person for him and his friends to pick on and make fun of at school. At school, there was an eighth-grade tradition of voting the weakest student as president of the student body. Zach thought that Cap would be the best person to be chosen as president of C average Middle School.
After a few days, the students voted for Cap as President of C Average Middle School. Many of the student body at school felt excited for Cap, especially Hugh Winkleman. Hugh knew that he would have been chosen President if it hadn’t been for Cap because he was a nerd and geek at school.
Soon after, all the students began to really like Cap for who he really was and he showed everyone about the importance of sympathy, caring, and respect towards others.

I really enjoyed reading this book because it talks about the importance of being kind, caring, and sympathetic to others. Even though Cap was different - he really cared. He started learning everybody's names, and tried his best to listen and take recommendations from everyone. Just as everyone started warming up to him, there was an accident - and then Cap disappeared leaving everyone to wonder where he went. What happened to the 8th grade president of Claverage Middle School? This is a great book about adapting to a new environment at middle school. I would recommend this book to everyone regarding the issues of being bullied at school and how to overcome difficult obstacles that may come up unplanned at school. It's a must read for all young teens!