Code Geass: Lelouch of the Rebellion by Goro Taniguichi and Ichiro Okouchi 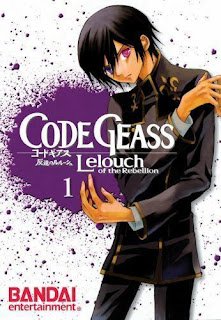 After the Holy Britannian Empire had taken over Japan using giant robots labeled Knightmare Frames, Japan is taken away from all rights and renamed Area 11 and its citizens Elevens. But a 17 year old Britannian has hopes of breaking up the very structure he is a part of. He has been bestowed the power of geass, also known as the power of the king, is a supernatural ability which manifests differently in each being related to their inner desires and personality, by a strange green-haired girl. Using his alternate persona “Zero”, Lelouch uses everything in his power the shut Britannia down once and for all.

I find code geass to be a thrilling book to read. The world of Code Geass is very interesting to explore. You have the depressing world of the Japanese facing racism against high and wealthy world of the Britannians.The mix of politics is nice blend to the action and fantasy. I find the anti-hero protagonist, Lelouch Lamperouge, to be a nice opposition to the secondary protagonist, Suzaku Kururugi. Both have similar goals in mind but different ways of executing them. This makes the rivalry and bonding between the two characters exciting. I would suggest this book to anyone who the manga “ Death Note” and “Guilty Crown”. 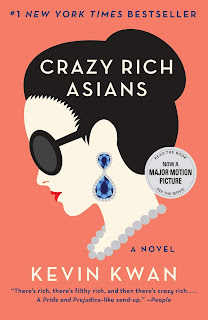 When Chinese-American Rachel Chu approves of the idea of spending the summer in Singapore to meet her boyfriend’s “run-of-the-mill” family and attend his best friend’s wedding, she envisions the visit to be simple, comforting, and a little boring. Little does she know that this “normal” Chinese family are nothing but. The cousin who spends millions on the latest couture, the mother who keeps control and check of everything ( even her son’s love life ), and the grandmother who are friends with royalty. Nick’s over expecting mother, his ex, and drama in the Young/Leong clan. Rachel needs to overcome these obstacles in order to stay by the love of her life’s side.

I thought of the book to be really inventive. I felt that the book really captured the brilliance of Singapore. Each and every single one of the characters have been given their own personality and traits which makes all of them stand out from one another. You have the beautiful Astrid, even though it is likely that she spends the most in the family, she is the kindest and one of the most successful. Overall, I really liked this book and I can find people who are into comedy, drama, and a bit of romance favor this adventurous book.

The Stand by Stephen King 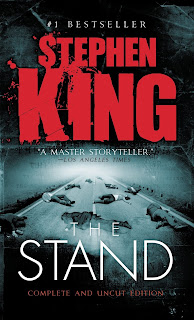 Stephen Kings's The Stand is a post- apocalyptic novel with a very complicated, intricate story line. After a devastating plague, illicitly engineered by the government in a secure facility, escapes and kills almost everyone, the survivors begin having dreams about two figures- "the black man" and a kindly old woman known as "Mother Abagail." The main characters of the stories are drawn to these figures- the woman seems to be a prophet of God, and the black man seems to be a demon. Each figure begins to draw a following, making small towns of survivors. The story follows these characters as they plan to infiltrate the black man's following and hopefully destroy him before they are killed by him.

I really enjoyed this novel by Stephen King. It had a very interesting premise- the idea of otherworldly forces in a post-apocalyptic setting. I think that fans of Stephen King or even fans of just apocalyptic/ post-apocalyptic books would enjoy this book very much. The entire book was suspenseful and scary, and some descriptions of the black man created an atmosphere where it seemed as if anything could happen. I was intrigued by the theological side to the book- the black man was some sort of demon or god, and the story was essentially about a conflict between good and evil. I also liked the extensive detailing that was utilized throughout the story. This book should be high on the reading list of everyone.

Posted by Teen Speak at 2:31 PM No comments: