The Luxe, by Anna Godbersen 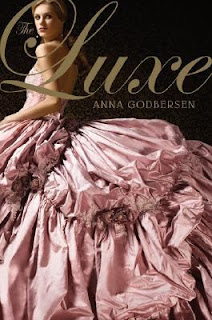 The Luxe, by Anna Godbersen, is a story about Elizabeth Holland, the star of all of New York's society. All eyes are on her arrival from Paris. But little do they know that her family is on the verge of poverty. Her engagement to the most available bachelor, Henry Schoonmaker, is the Holland family's savior. Elizabeth has enemies within that don't like her engagement proposal. One of her enemies is her maid, Carolina Broad. Both Elizabeth and Carolina had a crush on the late Mr. Holland's valet, Will Keller. Both girls want to live happily ever after with him. Another suspected enemy is her best friend, Penelope Hayes. These days, Penelope's eyes are on Eliazabeth's fiance, Henry. In the midst of all this is Elizabeth's little sister, the beautiful Dianna Holland. Dianna is the complete opposite of her sister. She breaks all of society's rules and does not plan to marry. But when her sister's fiancee falls in love with her, she is stuck in a strange courtship. Elizabeth, on the other hand, will go to extremes to be with Will, even if it means faking her own death. Elizabeth Holland is her mother's prize. She was groomed since birth to be the perfect debutante. The author brings out the "bad girl" in her that the average person would never see. This is one of those books I have had to read over and over again because it is so good. The rest of the books in this fabulous series continue the story of Elizabeth's strange death, Dianna's unwanted courtship, and Penelope's unparalleled ambition. -Reviewed by T.A., grade 10.
Posted by Teen Speak at 9:00 AM No comments: 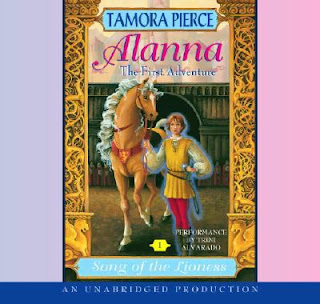 Alanna: The First Adventure, by Tamora Pierce, is a great book. The Tredbond twins are off to study their given fields. Eleven-year-old Alanna is off to learn to use her magic in a convent. Her twin brother, Thom, is off to the palace to learn to become a knight. The only problem is they want opposite things. Alanna is the one who wants to become a knight and Thom wants to learn to master his sorcery. The two deviously devise a plan to switch places. Alanna becomes Alan of Tredbond and heads off to the palace. This is her magnificent story.

Alanna is one person who proves that if a person tries hard enough, they can change the stars. She is quick to make a good number of friends and enemies. One of her most trusted friends is the heir to the throne, Prince Jonathan. Another is Myles of Olau. But the only catch is that no one knows her true identity.
When the squires are taken to the Bazhir desert on a fieldtrip, unwanted truths are revealed and a powerful enemy is made.

Tamora Pierce is my favorite author of all time. The books she writes are all down-to-earth and relatable. This book about Alanna is one that most of us can truly relate to. Her strong will and unstoppable mentality give her the strength to stand up to her enemies and protect her friends. Alanna is one person girls all around the world want to relate to. In this world, there are very few people who young girls can look up to and I believe that Alanna is one of those very gifted people. 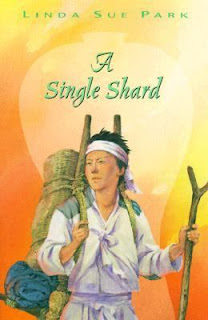 A Single Shard is a novel by Linda Sue Park. As an orphan, Tree-ear had been ignored, neglected, shunned, and cursed at. In 12th century Korea, orphans symbolized bad luck, so Tree-ear's only friend and companion was Crane-man, or the one-legged man who lived with Tree-ear under a bridge. Tree-ear's life only consists of foraging for scraps of food. At least, until the day Tree-ear accidentally breaks some of Min's pottery.

Tree-ear's village was a potter's village and Min was the best of all of them. Tree-ear works for Min to pay off the debt, but later becomes his unofficial apprentice in hopes of learning how to throw pots. After months and months of working under Min, an emissary comes from the King's Court to see which potter should be the royal commission. Min is not picked, but the emissary shows interest in Min's work and tells him to bring some of his flower vases with inlay work to the King's Court. When Min finally does, it is Tree-ear who needs to make the dangerous journey there.

This story depicts many facts about life in this period in Korea. This truly amazing book also shows changes in characters just like the fire changes pots of clay. It is a must-read book for everyone. I think this book is especially for those interested in Korea's past.

A Lady Raised High: A Novel of Anne Boleyn, by Laurien Gardner 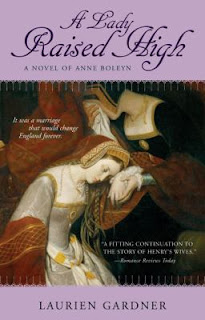 A Lady Raised High is a novel by Laurien Gardner. Living in the English countryside, Frances Pierce is ready for adventure. But unfortunately the adventures she seeks are high above her place in life. Court is the place that everyone dreams of going. Hidden behind the splendid facade of beautiful dresses, love, and merry-making, court can be a place of murder and intrigue. One day she is struck by luck when the king's progress crosses paths with Frances's home. Thinking quickly, Frances saves the "great lady" Anne Boleyn from a mud war and is invited to court to wait on Anne.

Anne Boleyn is the second most important woman in England, second only to the queen. Frances will soon learn to see through the thin invisible layer that separates the splendid court from the treacherous one. Innocence can only take a person so far. The court of Henry VIII is full of jealousies and one little girl is going in for the biggest plunge of her life.

Frances is the most innocent figure at the court of Henry VIII. Usually the people at court are lying, conniving idiots. Frances is a fresh, clean slate. Her view of the world is so unlike everybody else's. She doesn't look at everything for greed. My favorite part of this book is that it shows how one can be pure in a pool of impurities. This is the perfect book for anyone who enjoys historical fiction.