Search for Safety, by Paul Langan 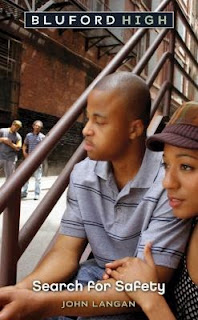 Search for Safety, by Paul Langan, is a sad story about a teenage boy named Ben. Ben’s life was going well until he gets the bad news that his mom is going to marry a man named Larry, that she has been going out with for only a couple of months. Ben ends up moving to a new house, and also a different high school. One day when Ben gets on Larry’s nerves, Larry begins violently attacking Ben, punching and kicking him. Ben’s abuse goes on for a while until people at school start noticing his bruises, until eventually the principal finds out and gets Ben help.

I enjoyed reading this book a lot because of the story line, which sometimes made me feel sad for the character. Because of the way the character acted and how he was treated. I liked it also because this is another book that you feel what the character is feeling. I recommenced this book to other people because i like this book and it is a very good book. it is also part of the blue ford series.

Reviewed by RB, Grade 8
Library Connection @ Adams Square
Posted by Teen Speak at 9:37 AM No comments: