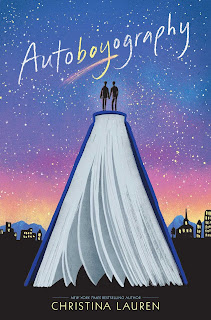 Half Jewish and Bisexual, Tanner Scott lives in one of the most accepting places in the US, Palo Alto, California. When his parents announce they are moving to Provo, Utah, the epicenter of the Later Day Saints, a conservative Mormon group that condemns homosexuality, Tanner's uber accepting parents warn him not to come out to anybody, for fear of his safety. Tanner, at the urging of his best friend Autumn, joins the Seminar at his high school, a writing program where students must write a novel in 4 months. What Tanner does not count on is Sebastian Brother, the epitome of a good Mormon boy, involved in his church, a famous writer as a result of the Seminar, and gorgeous looking too boot. As Tanner's connection with Sebastian grows, Sebastian struggles with his feelings for Tanner, and the expectations of his church, community, and family.

Autoboyography is a must read for any devout queer teen. Christina Lauren does a beautiful job of portraying the struggles of coming to terms with yourself when everyone else has such strong expectations of who you should be. The conflict of this book was Superb! There is lots of angst, so readers looking for a light, fluffy book, steer clear. This book made me realize, as a queer teen, how lucky I am to live in a community that supports me for who I am, and made me think about the struggles of teens who love their religion that maybe doesn't love them back. The angst, and longing, and heartbreak that Tanner experiences along with the inner turmoil of Sebastian tugged at my heartstrings and will be sure to enthrall any reader lucky enough to meet these two.

Posted by Teen Speak at 9:54 AM No comments:

Roll of Thunder, Hear My Cry by Mildred Pierce 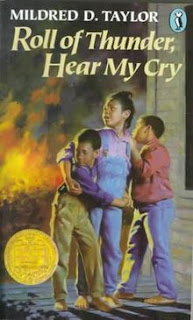 The book takes place in the time of The Great Depression and the Dust Bowl. The main character, Cassie, lives with her family, The Logan family, who are a sharecropping family. They also live with Big Ma, Cassie’s grandma, and Mr. Morrison, who worked with Mr. Logan. Also Uncle Hammer, Cassie’s uncle comes from up north to celebrate the holidays with them. The family has deal with a lot of problems in the community, like the Klu Klux Klan, getting Lynched, burned, and treated like garbage. The family does get into some of the trouble in the community, but finds a way out of it. All they want is to be treated equally like anyone else.

This story features an African American family living the deep south, set in the 1930s. The experiences are mainly those of the four Logan children; Stacey, Little Man, Christopher John, and Cassie. Cassie takes the place of the narrator, giving the reader a detailed yet innocent perspective throughout the story. The kids find themselves in some very unfair situations, always based on their race. Cassie fights this over the course of the story, refusing to fall victim to the ignorance of others.

Not only do I love the book, I love what it does. In a very entertaining way, this book brings light to a history that Americans commonly ignore. The 13th, 14th, and 15th amendments were often ignored in the 1930s South. The oppressive social, economic, and political structure created a new set of hardships for post-slavery African Americans. The story creates both characters you'll love and those you'll hate. I would recommend this book to any teen, but especially those that want to learn about the struggles of people before us.


This book follows an African American family (aka the Logans) in 1930's Mississippi. Our main character is a nine year old girl named Cassie. Cassie and her three brothers plus their friend TJ, go on all sorts of adventures, all while battling the harsh reality of racism at the time. The children are faced with lots of racial injustice, but they make do. The families go through both social financial struggles, but keep their heads up for the most part. There are a lot of changes when tension in the neighborhood grows much larger.

This is by far one of the most socially profound books I have ever read. It is way ahead of its time. The issues dealt with in this book are not to be taken lightly, but the author prefaced them in such a well written and creative way that something that is so complicated, becomes almost simple and easy to understand. I absolutely fell in love with the characters in this book, it was engaging and hard to turn away from. The social issues are highlighted so well, and I don't think enough people have read this book. I absolutely recommend!


Cassie Logan lives in Mississippi with her Mama, Papa, Grandmother, and 3 brothers. It is 1932, and her family is African American, but Cassie is only 9 years old and does not yet fully understand segregation and racism. Roll of Thunder, Hear My Cry is about Cassie's maturation in the face of racial injustice and how she, her family, and the black community survive through horrible things at the hands of whites. Cassie's school is poor and old, while the white school has sports fields, separate classrooms, and a sports field. The white school bus torments the Logan children, who do not even get a school bus. The Ku Klux Klan endangers the lives of the Logans and other African American characters throughout the novel. The Logans own their own land but struggle to make enough money to support and protect their large and loving family.

This historical fiction novel is a great read for all ages. Not only is it historically accurate, it also informs the reader of the hardships African Americans were forced to face in the past and still struggle with today. This is an important book for children because it teaches an important part of American history that cannot and should not be ignored. Also, the author, Mildred D. Taylor, is a wordsmith. She paints the scenes in the novel with such beauty and symbolism that sets the stage for the plot, which is entertaining but a hard truth to face. This was the only school book that I enjoyed reading, and I recommend it for anyone, especially people that are interested in US post- Civil War history or Civil Rights. The novel is filled with lovable characters and a good storyline that stays with readers even after they are done reading.

Posted by Teen Speak at 9:32 AM No comments: