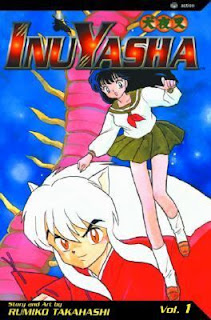 In InuYasha: Volume 1 by Rumiko Takahashi, Kagome receives a sacred jewel from ancient times on her fifteenth birthday. She accidentally falls into her family well and ends in medieval Japan. As she wanders the area, she finds an old village in which a demon comes looking for the sacred jewel. Kagome runs and ends up in the forest of InuYasha. There she frees InuYasha, a half demon, who saves Kagome with the sole purpose to use the sacred jewel for himself, but is restricted by a necklace. Kagome whi is the reincarnation of Kikyo, a priestess, that had a past with InuYasha tries to be friends with InuYasha, but fails. She storms out and is captured by bandits who want the sacred jewel. Inuyasha comes to her rescue to save the jewel, but Kagome throws it away and it is eaten by a crow. The chase begins; InuYasha and Kagome try to catch the crow and with Kagome's quick thinking, she accidentally shatters the jewel into many pieces. Then their adventure begins to find all the pieces of the sacred jewel.

I thought this manga was really imaginative and its plot was easy to follow and the ending left me hungry for more. The pictures and vivid colors contributed to the comprehensiveness of the story. Each character has unique qualities that made the manga very different than others. The fact that it is placed in medieval Japan makes the manga even more interesting. This manga would be perfect for all ages who adore mythical creatures. 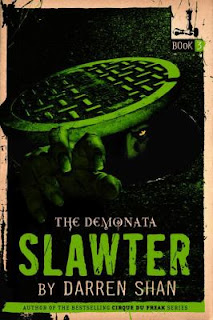 In Slawter, by Darren Shan, Grubitsch Grady, also known as Grubbs, has recently gained magical powers and learns about the demons. One day Davida, a famous horror film director, asked Dervish, Grubbs' uncle, if he could help with a new movie based on demons. Dervish agrees and takes Grubbs along with his brother Bill-E with him. During the first few weeks on set, Grubbs and Bill-E begin to make friends, chat with others, and see the action. In one particular scene when the demon kills someone, Grubbs is convinced the demon is real after what he has been through. In a later scene he sees Lord Loss, a powerful demon master. People begin to disappear and it makes Grubbs suspicious. Grubbs tries to convince Dervish, but cannot and decides to unmask the truth with Bill-E and Juni, Davida's close advisor. They unmask the truth, convince Dervish, and set out to warn the others, but it was already too late. Davida made a deal with the horrible Lord Loss and so began the slaughter. Grubbs and Dervish try to help the others escape from the horrible demons, but are able to only save a few. In the end Grubbs learns that his magic is far beyond what many Disciples possess.

I thought this book's plot was very unpredictable with many twists and turns. The fascinating demons of all shape and sizes added to the horror. The gore, guts, and blood made it seem very disgusting, but cool. The introduction of magic makes this book unique because magic is limitless and can do almost anything. The non-stop action made me even more excited of what comes next. Horror fanatics will be dying to read this thrilling, but scary book. 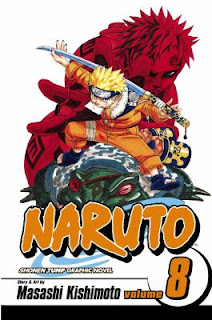 In Naruto: Volume 2, by Masashi Kishimoto, three ninjas, Naruto, Sasuke, and Sakura have just passed their junior ninja test and began to set out on a real mission with their teacher, Kakashi. The mission is to protect Tazuna, a bridge builder, and escort him to the Land of Waves. During the mission they encounter ninjas from the Land of the Mist who they easily defeat, but later, they have to fight against Zabuza, the demon. Kakashi battles him head to head using his Sharingan, but is captured leaving the others to protect Tazuna. They formulate a plan and are able to free Kakashi, who can then finish the job, but before he kills Zabuza, a mysterious ninja finishes him off. He drags him away, but really is on his side and saves him from death. Naruto and the others then make it safely to the Land of the Waves.

I thought this manga was very different than other mangas. The fact that it is based on ninjas makes it seem very exciting and secretive. The action is always on-going and never stops. Every page is full of intense training and thrilling battles. Each main character is different in their own way; they all have special skills and abilities. The storyline was thought out well and organized. This manga is great for any action loving fans. 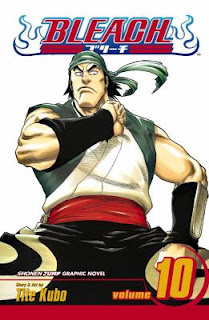 In Bleach: Volume 2, by Tite Kubo, Ichigo, a normal human gains powers of a soul reaper. His job is to fight hollows and when one of his friends, Chad, gets into danger with a hollow, Ichigo goes to help him. Rukia, a fellow soul reaper, and Chad try to fend off the hollow on their own, but cannot handle him. Then, Ichigo comes to the rescue and cuts the hollow down to size. The hollow sadly enters another dimension because of the cruel acts he committed as a human. After the battle, Rukia goes to the Urahara shop to pick up her order; one of these items was a soul pill. Ichigo eats it and his human body is given its own personality. Unfortunately the soul pill is defective and ruins Ichigo's image. Ichigo tries to track him down and finally is able to regain his body, but keeps the soul pill because the soul pill is just waiting to be destroyed. Ichigo continues on his quest to destroy hollows with Rukia.

This manga is very good because not only does it contain action, but it also adds in a touch of comedy. The author's idea is entirely original and I like the way soul reapers are described. The characters contribute to the story and some make the manga very comedic. It is not all exciting action, but it also appeals to the emotional view of the book. The creation of the hollows is very unique, but cruel. The system of soul reapers and hollows contribute to the plot because it is based on their everlasting battle. Anybody that is an action fan will love the unique and diverse plot.