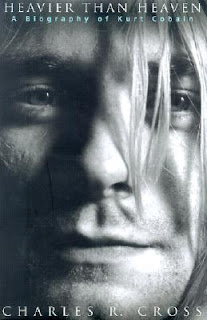 Heavier than Heaven, by Charles R Cross, is the uncensored, unfiltered biography of Kurt Cobain, the lead singer of Nirvana, and the leader of a generation. It begins from his days as an average American child, to his parent's divorce, a monumental emotional landmark for him. The book recalls his teen years living in no place particular as he was shuffled around between friends and family. It was then that he began his journey into music and drug abuse. It then talks about Nirvana's slow rise in the music world, the pressure of the band's popularity, Kurt's intense, often heroin-filled relationship with Courtney Love and finally Kurt's suicide. Heavier than Heaven is the kind of book that changes the view of a person, in this case changing my personal view of Kurt Cobain from just a musician, to a true artist. While definitely a mature book intended for older audiences, Heavier than Heaven provides a mature, uncensored view Kurt Cobain as he really was, and makes him seem an even bigger icon, while showing the sad, tragic tale of his life that led to his suicide. Heavier than Heaven is beautifully written, while remaining raw, one of the most inspiring works I have ever experienced, showing the story of a man who came from tragedy to change a generation.