The Pretty One, by Cheryl Klam 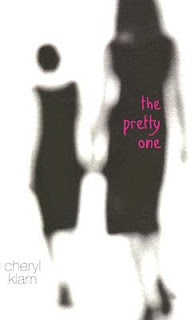 Everyone wants to be beautiful, gorgeous, someone that people will admire. Megan Fletcher had that wish. In The Pretty One by Cheryl Klam, Megan is an overweight, plain girl who had been overshdowed by her talented and beautiful sister, Lucy, for most of her life. When she gets involved in a car accident, a cosmetic surgery had made her become the "pretty one" and the center of attention. When the two sisters both fall for the same guy, let the drama begin.

To be honest, the story bored me. The writing was bland and the characters were confusing, almost like they were split in two. Lucy is the older sister and in some parts of the book she was aggressive and willing to fight her younger sister. Then in a matter of a few paragraphs, she was sweet and regretful. Was she a good character or the antagonist? Not only her, but Drew, the supposedly good-looking, mysterious, talented guy that Megan and Lucy both fell over, sounded like the most boring person to fall in love with. I could never see the connection between Megan and Drew and why she liked him in the first place. Cheryl Klam's writing had no tone. I felt like the words would come in one ear and leave in the other. I cannot even remember one sentence from that book. With the writing being so monotone, I could not tell which was the central conflict and when it was happening. The plot seemed uneventful. I believe this book could have been improved and I will probably never read this story again. There was an interesting point to this book, though. I did enjoy her message of "beauty is in the eye of the beholder" and "personality counts more than looks," which she presented in an original story. It was a fresh new taste of the idea of perception of beauty. Many girls, in this time period, can relate to Megan's thoughts and worries because in this century, media has put more pressure on outer appearance. There are many women who are going through plastic surgery or girls trying to lose weight in unhealthy ways. Women today are stuck in this society rush to become the "pretty one." I would recommend this book to some people who enjoy too-cheesy stories and others who need something to read to pass their time.
-Reviewed by Sophia, grade 9.
Posted by Teen Speak at 3:45 PM No comments:

Romeo and Juliet, by William Shakespeare 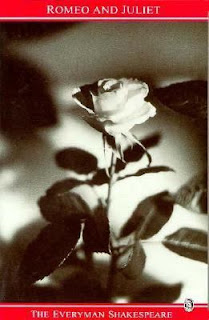 Romeo and Juliet, by William Shakespeare is the most famous love story of all time and fully captivating. William Shakespeare's most famous play is one that many don't understand because of its dialog. But in truth it is one of the most extraordinary works in English literature. At the beginning, young Romeo is devastated by the heart break of not being able to win Rosaline's hand. Juliet is preparing for the ball that will change her life forever. The pair has a milestone in the way. They are from the two oldest feudal families in Verona. They soon form a forbidden bond which causes them to marry in secret. With the communion of their marriage the goodly friar hopes to bring peace between the two families. When they are both confused and troubled, they go to him and receive the deadliest advice of their short lives. Romeo drinks a potion from the apothecary and dies. When Juliet awakes from her long slumber only to find that her beloved Romeo is dead. To her grief and disbelief, she acts on a moments notice and has her love's dagger take "its sheath in {her} body." When their funerals come around, the families bury both their children and their feud. Never was there a story more woe than that of Juliet and her Romeo.

Having previously read this story on my own I thought I would dislike it when we read it in my English class. On the contrary, I understood the story better and it is now one of my favorite stories. Romeo and Juliet are considered the Edward and Bella of their day. They love each other enough to kill to be. Even though the story takes place in five days, it is incredible.

Tunnels of Blood, by Darren Shan 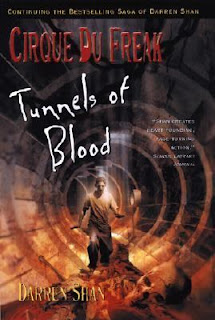 Tunnels of Blood is the third book from the series of Cirque Du Freak. In this novel, Darren Shan, the vampire's assistant is in training with Mr. Crepsley to have more knowledge as a vampire and how to survive. Darren has joined the Cirque, or the freak show that is roaming around the world with Mr. Crepsley. After a while, the two left their home to go to a city for a research with evra, the snake boy from the Cirque. As they get used to the new city, Darren falls in love with a human girl, and then they get into a big trouble. An evil vempire named Murlough kidnapped Evra to make Darren and Mr. Crepsley to rescue Evra, while he sets up a trap.


Honestly, I had imagined the vivid details as I read the whole book. It is just fantastic how it gives so much description and details. It's just absolutely crazy how I can be glued to the seat and finish the book. It is so hard to stop reading in the middle of the book because the story is so interesting. Darren Shan, the author, is amazing yet creative when it comes to writing.