Six of Crows by Leigh Bardugo 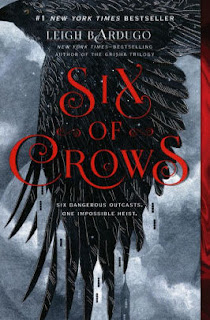 In Kaz Brekker's world, magic exists. Special people called Grisha can control the elements- and sometimes even the actions of other people.
Kaz, an infamous conman known by his street name "Dirtyhands," is offered a deal. If he breaks a scientist known for creating a drug that enhances Grisha power by thousandfold out of a government facility, he would receive more money that he could ever have a use for. Kaz puts together a team, one he believes will actually succeed where no one else has before. Surrounded by danger, betrayal, and deception, Kaz and his crew must be careful- or be as ruthless as their opponents.

I enjoyed Six of Crows by Leigh Bardugo very much. The story was riveting and urgent, and had tons of plot twists that made it even more exciting. The way the novel changed its point of view from character to character was also interesting, and each of the characters seemed realistic. Their backstories and how they ended up as gangsters was explained very well. I enjoyed almost every part of the book. I can see people who like magic and fantasy novels loving Six of Crows. I would definitely recommend this great book to others.


This novel takes place in a mystical land called Ketterdam. Six criminals, with Kaz Brekker being the lead of this gang need to pull off an extrordianry heist. During this huge adventure every single gang member goes through a phase of their own struggles they have to overcome in order to impress Kaz and save their own lives.

I have read this book twice and honestly I can read it over and over. A year ago I wanted to start reading like I used to so I asked one book worm if she had any recomendations. She told me to read this one and I won't regret it. I was a little hesistant because I usually don't read these types of stories but I'm so glad I did. Diving in head first, and determined to get through this meaty book, I read every word instantly trying to get to the next part. So, yes, I really do reccomend this book to any other teens wanting to put down their cell phone and just read a good book you get hooked into. Like the dregs say, "No mourners, no funerals".

The Red Scrolls of Magic by Cassandra Clare 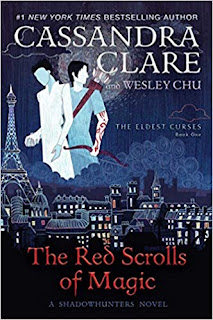 Magnus Bane, a famous warlock, and Alec Lightwood, a Shadowhunter, are on a romantic vacation in Europe when they begin to hear rumors of a demon-worshipping cult, the Crimson Hand, said to have been created by Magnus himself. However, Magnus has no memory of creating the cult. Even more problematic, the cult seems to be worshipping Asmodeus- one of Hell's most powerful demon princes and Magnus's father. When Magnus and Alec are attacked by multiple lesser demons that seem to have been summoned by the Crimson Hand, they put aside their vacation and hopes to get to know each other better and go on a hunt to find the leader of the cult, guided by a former member who wants revenge. Surrounded by murder and betrayal, Magnus and Alec must trust each other more they have ever had before in order to make it out alive.

The Red Scrolls of Magic by Cassandra Clare is a fantasy/paranormal fiction novel that I liked reading. I liked the action and plot twists that were utilized in the book. However, I didn't get totally drawn into the novel- for some reason, I didn't enjoy it as much as some of Clare's other books. The scenery was detailed, and the characters seemed realistic. Readers of fantasy fiction would probably enjoy this book.
Honestly, I thought this novel was alright, but I would have rather read something else.

Ghosts of the Shadow Market by Cassandra Clare 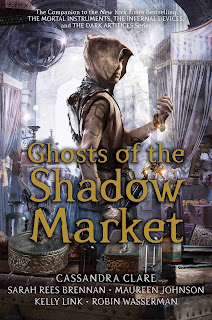 This novel by Cassandra Clare follows the story of Brother Zachariah- a Silent Brother who used to be Jem Carstairs- a Shadowhunter who lived and laughed and loved like everyone else. Jem had a friend- William Herondale- and a lover- the warlock Tessa Gray. However, Jem was addicted to yin fen, a demonic drug that would have killed him if he hadn't been turned into a Silent Brother. An immortal sworn protector of the secrets of the Nephilim- a line of people with the blood of the angel Raziel- Jem is magically distanced from feeling emotions or love like a normal person. Jem visits the Shadow Market, a gathering place for all sorts of supernatural creatures, in search of a supposed missing line of Herondales. As Jem follows the clues he is given, he is surrounded by grave peril. Along the way, he struggles to hold on to his humanity and love for Tessa- in the hope that he might be cured of the yin fen.

I liked reading this book very much. I enjoyed the action, mystery, and Jem's desperate hope to have his old life back and to be with Tessa. However, I didn't really understand why some stories in this collection didn't seem to have anything to do with the main plot. I think that people who read and loved Clare's Mortal Instruments, Infernal Devices, and Dark Artifices series would enjoy this novel. Readers who like fantasy novels about magic and angels or demons would also probably think this book is interesting. However, people considering reading this book should probably read the previous series first, as some characters and their actions would not make sense otherwise. This novel made me feel on edge when action happened and thrilled when Jem eventually got a happy ending. I thought this book was good and I highly recommend it.


Reviewed by NK, Grade 10
Montrose Library
Posted by Teen Speak at 10:27 AM No comments: