The Only Alien on the Planet, by Kristen D. Randle 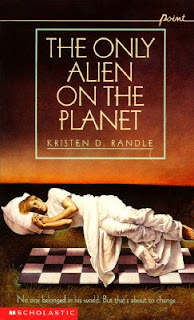 In The Only Alien on the Planet, by Kristen D. Randle, Smitty Tibbs is different from everyone else. He never speaks nor smiles. He doesn't let anyone into the world he has created for himself. Hence, Smitty is given the name "the Alien" at his school. Ginny is the new girl in town who moved from the West Coast. For the first time in her life, Ginny feels alone. After seeing Smitty in the school's hallways, she realizes they have one thing in common -- they have both experienced loneliness. As a result, she decides that she has to meet him. Ginny, along with her new friend Caulder, decide to reach out to help him and throw down the wall he has built around himself. After taking him in, they are introduced to his world where his only memory is the abuse he has suffered. While helping "the Alien" overcome his problems, a tender, but cautious romance arises in Ginny and Smitty's hearts. I would recommend this book to anyone who is interested in a love story about two teenagers who were different from everyone else in the world. Once you start reading this book, you would never want to put it down.

.
Posted by Cheryl, Teen Services Librarian at 4:46 PM No comments: