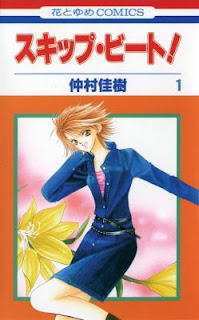 Skip Beat!, by Yoshiki Nakamura, is a manga about Kyoko Mogami and the showbix. Kyoko Mogami is a high school girl who gave up everything: school, vanity, her home, for her prince charming, Sho Fuwa. Sho Fuwa is an idol singer that all the girls in Japan love and he can't take care of himself; so he brought Kyoko to Tokyo with him to be his maid. Kyoko was completely happy because she thought Sho took her to Tokyo was to be with him as a girlfriend. Later, after a series of arguments about Sho's revival, Ren Tsuruga, Kyoko finds out about Sho's true intentions and her dark side comes out, seeking vengeance. In order to get revenge, Kyoko realizes that she must join the world of elites and become a superstar. She goes to a talent agency to audition and there she meets Ren Tsuruga, her worst enemy of the past and then after a short encounter, her worst enemy of the present. With amazing persistence, Kyoko gets into the audition but her broken heart, from the ordeal with her lifelong love, Sho, proves to be a large disadvantage. Kyoko pursues her dreams and revenge alongside Ren and a few others in the showbiz, while relearning what it means to love.
This is a great story and it still continues on in other volumes. This story is more for those who like romance and woman empowerment. This also teaches some great life lessons so readers can learn a little, too. I would definitely recommend this to all those who like shojou mangas of all types. The drawings are also very nice, as they are one of Yoshiki Nakamura's best works. Manga lovers and romance readers, read this and you'll be sure to love what you see.