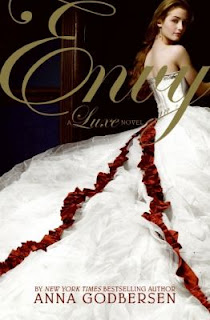 Envy, by Anna Godberson, is set in the dawning days of 1900 New York's biggest scandals, socialites, heartbreaks, and marriages are brewing within. Elizabeth Holland is back after months of being "kidnapped." Her mother is expecting her to marry and to have children. But when she finds that she is pregnant with Will Keller's baby, perspectives change. She is forced into wedlock with her fathers old business partner, Snowden Carins. Dianna Holland is at the peak of glamour and beauty. She has fallen helplessly in love with the one man i the city she can't have, Henry Schoonmaker. Henry, being her first love, is a very fragile think for Dianna. But what happens when she sees things she that are not meant for her to see? Penelope Hayes has successfully used blackmail to marry Henry Schoonmaker. She finally got everything she wanted but she won't rest. Henry Schoonmaker is one of the most talked about men in New York. He is currently married to Penelope Hayes but is still head-over-heels in love with Dianna Holland. And he will do anything to have her for himself. And if that means joining the army then he will do it.


Penelope Hayes is a spoiled brat. Envy is the place where things seem to be getting better, but then dissolve into nothing. Elizabeth is back and pregnant with Will Keller's baby. This second to last book in the Luxe series makes you crave the ending. You will want to save each line in a vial of classified information. I send my praise to Anna Godberson for her job on this series.
.
-Reviewed by T.A., grade 10.
Posted by Teen Speak at 2:24 PM No comments: 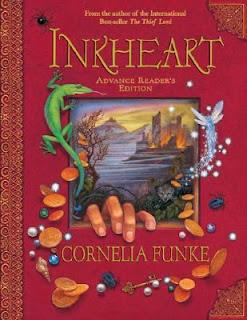 Inkheart is the first book of a series written by Cornelia Funke. Meggie lives alone with her dad in Italy. One night, a man named Dustfinger comes to the house and talks with Meggie's dad, Mo. Dustfinger calls Mo Silvertounge because he can read things out of books. He had read Dustfinger, Capricorn, and Basta out of Inkheart, and his wife into Inkheart. Dustfinger tells Mo that Caprocorn is coming to kidnap him. The next day, Mo, Meggie, and Dustfinger leave the house to go to Elinor, Meggie's aunt. Elinor is a book collector who owns a mansion filled with books and an alarm system to protect them. One night, Dustfinger takes Meggie outside during the night to show her what tricks he can do with fire. He asks Elinor to turn off the alarm so he can perform during the night. She does. During the show, a group of men break into the house and kidnap Mo and the book Inkheart. Dustfinger had told them where they were staying, and planned to break-in. He left with the kidnappers. Meggie soon found out that Elinor had swapped Inkheart with another book, and they decided to find Capricorn and swap Mo for Inkheart. Dustfinger returned to the mansion and said he had followed Capricorn's men back to where Capricorn was living. He, Meggie, and Elinor traveled to the village planning to make the swap. They gave Capricorn the book, but Capricorn then took them captive. Except for Dustfinger. Dustfinger is working for Capricorn in hopes that he could return to the world he loves in Inkheart. Capricorn turns on Dustfinger and burns all the remaining copies of Inkheart so Dustfinger cannot return to his world. Mo, Meggie, and Elinor are locked up. The next day, Capricorn has Mo read gold out of a book. Mo succeeds but also accidentally reads a young boy out of a book. He and the boy are locked up again with Meggie and Elinor. That night, Dustfinger rescues them all because he hates Capricorn for destroying the copies of Inkheart. They run to a nearby village and from there, Elinor returns home while Dustfinger, the boy named Farid, Meggie , and Mo look for the author of Inkheart. They find him. His name is Fenoglio. Dustfinger runs away with Farid when Fenoglio tries to talk to him. Mo and Fenoglio try to figure a way to get rid of Capricorn and his men. Mo gets a phone call from Elinor. She says all her books were destroyed by Capricorn's men. Mo goes and picks her up at the airport. While he is gone, Basta, Capricorn's most trusted servant, finds Meggie and takes her back to Capricorn's village, along with Fenoglio. Meanwhile, Dustfinger hid out near the village and found out there was another copy of Inkheart still in the billage. He asks his friend Resa, a maid for Capricorn, to try to find out where the book was hidden. Resa is caught, and so is Dustfinger. Meggie is locked up in a room with Fenoglio. She finds the book Peter Pan in the room and reads aloud to herself at night. She suddenly sees Tinkerbell flying about. Just then, Basta comes in, sees Tinkerbell, catches her, and drags Meggie to Capricorn. Then Capricorn arranges for Meggie to read Shadow out of Inkheart and kill Dustfinger and Resa. The Shadow is a faceless monster that kills anything and cannot be killed. When Fenoglio finds out what Capricorn plans to do, he starts writing an alternate story so that when Meggie reads it, the Shadow will come, but not obey Capricorn. Instead, the Shadow would turn against him and his men. Meanwhile, Mo and Farid plan to infiltrate the village and rescue Meggie, Dustfinger, and Fenoglio. However, Dustfinger already escaped by taunting Basta into coming into his cell and then disarming him and running away. However, Resa didn't escape. Elinor had gone to the police in a nearby village, but when the policeman came to Capricorn's village, he only asked a few questions and left, leaving Elinor to be locked up in the village. However, she is locked up with Resa, who is really Teresa, her niece and Meggie's mom. On the evening that Meggie is suppose to read the Shadow out of Inkheart, Farid and Mo set fire to the village to cause a distraction. Capricorn sends men to put out the fire, but continues with the execution. Just before Meggie starts to read from the book, Fenoglio tries to run away. All eyes turn to him as he hit Capricorn's guards and ran for it. He was caught, but he had given time for Meggie to slip a piece of paper with Fenoglio's alternate story into the book. She started reading the alternate story, but then Capricorn noticed that it wasn't the real story. He ordered his men to cease her, but the Shadow had started to emerge from the ground. Will the Shadow obey Meggie or Capricorn? And will Mo, Meggie, and Teresa be reunited? Find out. I think this is a good book because it is unpredictable. There is a lot of twists in this story. This book is good for readers who enjoy fantasy because there is a lot of make believe things in this book.